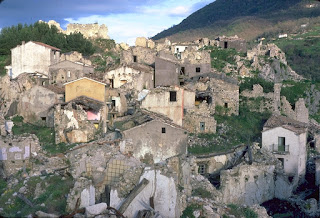 Laviano, Province of Avellino, 1984
Monday 23rd November 2020 at 19:34 and 52.8 seconds marked the fortieth anniversary of the 1980 southern Italian earthquake in which I was directly involved as a survivor. The magnitude 6.9 tremors killed 2,914 people and injured 8,848. About 280,000 people were left homeless (including myself) and damage was reported from 628 municipalities.  In the epicentral area, 36 towns were completely destroyed. The anniversary provided an opportunity to look back at the event and consider how the recovery process fared. It is salutary to reflect that many of those scholars who have studied this disaster are too young to have experienced it.

The year 1980 was something of a watershed in the field of disaster risk reduction (or disaster management as it was then known). Civil protection, in the form of locally-based disaster response capacity, would begin to emerge in the following decade, which would end with the inauguration of the United Nations Decade for Natural Disaster Reduction. The incessant, cumulative hammer-blow effect of disasters of all kinds on modern society had begun to stimulate a consistent demand for greater safety and security. It would soon become imperative to satisfy the demand with far-reaching changes in the organisation of the response to major emergencies.

During the early aftermath I corresponded with Senator Edward Kennedy about the American response to the disaster in the Campania and Basilicata regions of southern Italy. It was clear that the US Government was influenced by the suffering and the shortcomings of the response to the tragedy as it built up its own capacity to respond to natural hazard impacts. The Italian disaster came only 18 months after President Jimmy Carter had signed the US Federal Emergency Management Agency into being, and FEMA was still finding its feet.

The initial response to the disaster in Italy was slow and chaotic enough instantly to become a national scandal. It culminated in the issuance by Sandro Pertini, the President of the Republic, of a stern and very public rebuke to the government of prime minister Arnaldo Forlani. More positively, the shortcomings in the response set in motion a long process of creating a viable modern civil protection service at all levels, from national to local.

The reconstruction was a long-drawn out process. For example, in the town of Salvitelle (1981 population 952), in the mountains of the Province of Salerno, it took 17 years. This small, ancient hilltop settlement was completely ruined. With participation and oversight from the University of Florence's Department of Architecture, it was carefully reconstructed to anti-seismic standards, with full restoration of its historic buildings and the original character of its built environment.

In 1980 there was much to learn about recovery from disasters in the modern world. As a result, one study estimated that 14 different models of reconstruction were applied in the disaster zone. Although it was relatively well connected by modern highways, the area had the reputation of being remote, wild and very much an economic backwater. Attempts to create industrial growth poles came quickly to a predictable end as the firms attracted to them took the subsidies and closed up shop as soon possible. Nonetheless, there were some surprising victories in the food processing and automotive sectors. For the local economy, all was not lost, or not quite all.

For many years after the disaster local people lived in 40-square-metre wooden prefabricated homes, the transitional housing provided by the government. There were some very large encampments, notably Bucaletto in Potenza city, the capital of Basilicata region. There was some sense that these places had become ghettoes for the disadvantaged. A parish priest, whose first name was Dante, wrote a long poem called The Divine Comedy Brought Up to Date, in which the third tier of Hell was inhabited entirely by earthquake survivors housed in everlasting temporary accommodation. In some towns the huts are still there, decades after they were first erected. Most are used as holiday accommodation for émigrés who return to their home towns during the summer vacation period.

The smallest municipality in Campania region is Romagnano al Monte (1981 population 477). The original settlement is draped spectacularly across a spur of a mountain with a precipitous drop into a gorge of the Melandro River. It was ruined and completely abandoned after the earthquake. A new town was built a short distance away, although the town hall and coffee bar remained in huts. Ever since the disaster the local administration has been struggling to rehabilitate the original settlement, which lies decaying and cordoned off. They have managed to build an information technology centre and a museum within the ruins, but not to restore the parish church, town hall and attractive urban fabric. This rather bizarre and dysfunctional strategy is purely the result of the pattern of availability of money. The European Union's regional fund financed the new buildings, but the town could only access money to build specific types of structure. At present rates it will take centuries to complete the rebuilding, but there is little chance that more funds can be generated and the local economy is one of the most depressed in Europe.

The epicentral area of the 1980 earthquake takes the name Irpinia, after an ancient Latin dialect word for wolf. The positive aspect of the reconstruction is that it did eventually happen, despite all the problems of economic marginalisation and low priority on the national agenda. It proved to be a crucible of experimentation in architectural, engineering and urban planning terms. The results are highly variable both in terms of their effectiveness and their aesthetic worth. Towns like Senerchia and Lioni were rebuilt in situ. Some, like Sant'Angelo dei Lombardi, worked hard to recreate the original genius loci, or spirit of place: others did not. Conza di Campania and Romagnano al Monte were rebuilt from scratch on green-field sites, posing the problem of what to do with the ruins. In Conza they are used for summer festivals, but the effect is at best bitter-sweet. In Senerchia the cumulative effect of ruination by centuries of seismic activity has created something like the levels of excavation of ancient Troy or Knossos. Comprehensively, there is much to study in the reconstruction of Irpinia, and much food for thought in the problems confronted and solutions invented.
Posted by Professor David E. Alexander at 16:48