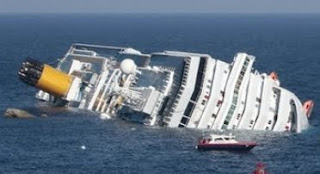 Davos (CH), 16 January 2012. The Costa Concordia shipwreck offers some interesting observations about risk and its effect upon disaster and about evacuation. First, let us examine the question of what happened.

The Costa Concordia is a Concordia Class ship of 114,500 gross tonnage, 51,387 tonnes displacement. It was built in 2005 at Sestri Ponente, Liguria, Italy, and completed its maiden voyage in June 2006. It is owned by the UK-US company Carnival Corporation plc, the world's largest cruise ship operator. The ship was commanded by Captain Francesco Schettino, who joined Costa Cruises in 2002 and was made captain in 2006.

In the evening of Friday 13 January 2012 the Costa Concordia deviated from its regular programmed route through the Tyrrhenian Sea in order to make a close approach to Giglio, an island in the Tuscan Archipelago close to the Argentario Peninsula. Giglio is 23.8 sq. km in size, has a population of 1,458 and is economically dependent on fishing and tourism. The Costa Concordia had carried out a similar manoeuvre in August 2011, which led some people on the island to comment that it was dangerously close.

The alteration of course was not approved by the operating company and involved cancelling alarms and part of a pre-programmed route. At about 21.40 hrs CET while about 150 m from the coast of Giglio the ship struck a rock, which tore a rift about 70 m long and up to 48.8 m wide in port side of its hull (the Costa Concordia is 290.2 m in length). This caused the ship to decelerate rapidly from 15 to six knots and created a pronounced list as compartments below the waterline flooded. The ship then beached on a coastal shelf 37 m deep and less than 100 m from the coast. It was inclined at 60-70 degrees and about half-submerged.

There were 4,229 people on board, of whom about 1,000 were personnel from the multinational crew. The rest were passengers from different countries. They were evacuated over a period of less than two hours, mostly by life-raft but in a few cases by swimming ashore (and thus risking hypothermia). At the time of writing this, six bodies have been recovered and 24 passengers and four crew members are still missing, which amounts to a potential mortality of 0.5%. Sixty-four people were injured, mainly through broken limbs, cuts and abrasions and exposure or mild hypothermia.

The captain and first officer were detained by the police with the possibility that they would be indicted for manslaughter. At the time of writing efforts are underway to remove 2,380 tonnes of fuel oil from 17 double-hulled tanks and four other containers. If the oil escapes, serious damage could be done to sea-floor ecology in the vicinity of a marine reserve. Early indications are that the ship may be declared a constructive total loss, with a cost of about $500 million, and that Carnival Corporation will suffer a loss of earnings of $85-95 million in the current financial year, including the effect of the drop in value of its shares. Nevertheless, as I write negotiations are underway to conduct salvage and reflotation.

The following preliminary observations can be made on the basis of the incomplete evidence that is publicly available at the time of writing, less than three days after the event.

Risk taking. It appears that the unauthorised approach to Giglio involved substantial risk to the safety of the ship, and probably more risk than was in any way acceptable. One wonders what procedural mechanisms existed in the company to limit or avoid such risks? The technical mechanisms appeared to have been satisfactory but could be overridden. It is as well to remember that an interview with Captain Smith of the Titanic, shortly before its last voyage, recorded him as saying that his career had been distinguished by how uneventful it had been. Maritime risk is not a continuum but a spiky phenomenon, and one that can harbour great surprises (if I may be forgiven an instant of inadvertent levity).

Alarm. The first sign of problems involved a "boom and groan" noise and a substantial jolt as the ship rapidly decelerated, which also toppled or threw objects around on board. Apparently, passengers did not raise the alarm by calling external authorities for about an hour. In the meantime they were advised that there had been an electrical fault. Quite probably, passengers and crew experienced normalcy bias, the desire to believe the least threatening hypothesis. In some respects, the situation was analogous to that of the MS Estonia, which sank in the Baltic Sea in 1994 with the loss of 851 lives, 85 per cent of those on board. Over a 45-minute period, the Estonia listed 30-40 degrees before listing 90 degrees, which made evacuation from lower decks impossible. Listing was rather less on the Costa Concordia, but it nevertheless complicated movement aboard the ship. The first advice to passengers appears to have been to go to their cabins. This highlights the management difficulties experienced in the 'hiatus period' when managers do not have enough information to determine a reliable strategy and thus tend to require passive behaviour from those people they have to manage.

Evacuation. Comprehensive training meant that procedures were clear. However, despite drills, passengers had no experience of evacuation and some underestimated the risk and behaved inappropriately. A degree of chaos is inevitable in such conditions as listing complicates the launch of life rafts. Unlike the Titanic, which was grossly undersupplied with lifeboats, the Costa Concordia had some redundancy in its life raft accommodation. Nevertheless, it is difficult to launch 150-170 people into the sea from a severely listing ship. An amateur video shot by one of the evacuees was widely circulated in the mass media with the title "Lifeboat panic caught on film." However, when one watches the video clip, it tends to show the opposite, and thus confirm the absence of panic rather than its prevalence, as in so many previous disasters. Nevertheless, as fear of entrapment is one of the principal causes of panic, the conditions were ripe for it to break out, as it did on the Estonia when listing became chronic and movement was inhibited. An element of luck intervened: the ship beached on a coastal shelf in calm weather. In stormier conditions it could have slid into deeper water and sunk completely without the opportunity to evacuate almost all people on board. In valediction, there does not appear to be evidence of discriminatory evacuation which might have put vulnerable people at risk, even though at least two of the dead were senior citizens of advanced age.

Management of the aftermath. Costa Cruises appears to have adopted a standard business continuity crisis management approach based on comprehensive communication. The company distanced itself from the decision-making process that led to the disaster. It will require substantial resources in order to deal with claims: millions of euros of money and assets were abandoned aboard. There is thus a need for a system rather like the one developed by SAS Airlines and promoted by IATA for dealing with the administrative needs after an air crash—but on a larger scale.

Shore-based civil protection and coastguard forces appear to have acted well, although as in many such cases it took vital time for the enormity of the situation to be appreciated in full. The management reliance on the Prefecture of Grosseto (the province in which the disaster occurred) confirms the persistence of the 1990s model of civil protection in Italy, despite the reforms intended in the Bassanini decree-law of 1998, articles 107 and 108 of which shifted the balance of power to the regions.

Media response. Early reports reflected some of the uncertainties garnered from a mass of differing perceptions of the event. Whether the crew acted efficiently in the evacuation or not, whether the alarm was sounded in the right manner or not, whether there was panic and how much danger was involved in reaching the shore, and whether the captain abandoned ship before some of the passengers and crew are all examples of matters that were not reported reliably, perhaps with some reason. Despite the purveyance of conflicting information, the reporting was relatively free of the usual distortions. This may have been because the end result of the disaster was much less severe than it could have been if the ship had, for example, sunk in deeper water. Hence, the pervasive desire to blame was muted in this case. Human error undoubtedly played a part, negligence may have been a factor, but there was no great desire to accuse. There might have been in a more severe disaster, and in that case accusations would undoubtedly have been launched more freely. Nonetheless, the media's incessant emphasis on 'human interest' stories provided an unbalanced overview of the difficulties of evacuation, much skewed towards the extreme conditions related by a minority of people who had a relatively hard time.

Conclusion. No doubt other lessons will emerge, and these lessons will be qualified by new information. In the meantime, in one respect the Costa Concordia disaster reminds one of the Buncefield oil storage depot explosion and fire in Hertfordshire, England in 2005: out of the most tranquil situation, where routine conditions have prevailed since anyone can remember, can be born an extraordinary scenario, and perhaps an apocalyptic one. This is what 'disaster risk' can mean.

Addition 20-1-2012. Information subsequently released has tended to confirm the hypothesis of human error that overrode technical protection mechanisms and automated systems. Besides the implication of negligence, three aspects of this disaster remain particularly strinking. The first is the procedural failures regarding evacuation. Passengers (by then wearing lifejackets) were initially advised to return to their cabins. This could have led to high mortality if the ship had sunk in deep water. Moreover, opportunities to abandon ship before it started listing were wasted. Secondly, many other instances have come to light of large cruise liners, including the Costa Concordia herself, coming unacceptably close to Italian coasts. It is notable that legislation has to be enacted (by emergency decree) rather than relying on the cruise operators to excercise normal prudence and caution. Thirdly, statements made public by numerous protagonists, from ships cooks to managing directors, have been so contradictory that it is clear that the truth about this incident is in short supply.