Disaster Studies Outside In 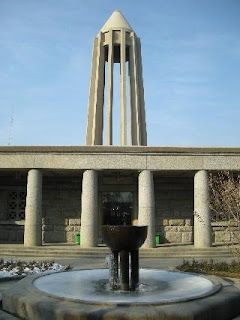 The mausoleum of Ibn Sina, or Avicenna, in Hamadan, Iran

Professor J-C. Gaillard has published one of the most original and profound meditations on disaster risk reduction to appear in recent years (Gaillard 2018). I thank J-C for his provocative and stimulating contribution. It is an honour to disagree with him.

His paper is a critique of disaster studies over the last 40 years. It raises some interesting and controversial questions. For example, is to be a scientist also to be a colonialist? Why should the search for a set of universal truths be regarded as hegemony? J-C’s thesis is that Western (i.e. European and North American) models of science have suppressed other productive ways of thinking. This is one reason why the hazards paradigm has continued to eclipse the vulnerability paradigm. Western technology powers this dysphasia. I am intrigued but not convinced.

As undergraduates, we were all induced to read Thomas Kuhn’s The Structure of Scientific Revolutions (Kuhn 1970). On a shelf in the LSE library there was a row of 29 dog-eared, well-thumbed copies of this book. The next step was to believe Kuhn’s thesis. But ever since I graduated, I have felt that the idea of a Kuhnian scientific revolution was a self-fulfilling prophesy rather than a concrete reality, convenient rather than true. Admittedly, scientists (including social scientists) are apt to imitate their peers when deciding what to study and how to do it, but science is more pluralistic than the paradigm hypothesis implies.

Western science is not 40 years old (pace, J-C) but stems from the work of thinkers two millennia ago, strongly tempered by their counterparts in the Arab world. To mark that fact I made a personal pilgrimage to the tomb of Ibn Sina (Avicenna) in Hamadan, western Iran. He bore some responsibility for the hazards paradigm! Disaster science, born in Canada (Prince 1920) and Russia (Sorokin 1942), is only 100 years old, but it has taken the same path: a search for universal truths about the human condition.

Technology may indeed have been the means of repressing African and Asian peoples, and denying the value of indigenous knowledge, but that is far from the whole story. Asiatic societies have been at least as keen on technological solutions as western ones - indeed, often more so. On the other hand, Asian and African academics have fully embraced the Western model of scholarship, the experimental method of replicability (Harvey 1965).

No one would deny that there is much to learn from local conditions. Western disaster scientists have been investigating them in many contexts, western and eastern, for a century. In this endeavour, there has been no shortage of pluralism. However, much depends on what the researcher makes of local knowledge. Local studies are all very well, but unless they have something to say of a more general nature they have limited utility.

In disaster studies at present, the most prolific country is China. There are some particularly Chinese preoccupations (the effect of drought upon crops, seismic landslides) but most Chinese disaster science is perfectly similar to its Western counterpart.

One of the most negative aspects of the hazards paradigm has been the way that it has discouraged cultural studies of disaster risk. But rather than being forcibly exported, ‘Western culture’ is an oversimplified concept, a ragbag of many different things (and a good many of them were the product of cross-fertilisation with non-Western influences). Western countries have many different cultures. In response to that, colonialism was practised at home before it was ever exported. Readers of this my detect an inconsistency between the idea of the Western cradle of universal science and the plurality of Western cultures. In fact, science is not ‘Western’, it is the property of all humanity, but what counts is how we use it. And we use it in different ways.

Some time ago, I wrote about Baroque culture as a model for the present day, because it thrived on the tension of opposites (Alexander 2000). It is a pity no one has taken up the challenge of investigating the lessons of history given by the baroque period (Maravall 1979). Although history does not repeat itself, it has a tendency to foist the past upon us in entirely unexpected ways. The tension of opposites fuels creativity at the same time as it creates unreconcilable contrasts. That is what we face in scholarship as well as in life.

The real enemy of inclusiveness is not academic colonialism, but competitivity. This is now truly a global phenomenon. Asian universities are no less competitive than are Western ones. We know that there is a paradox: science is better advanced by collaboration than competition, but global models force us into the competitive model.

There is no greater oversimplification than the idea that people who live in North America and Europe are responsible for global phenomena. For this to be true, the mechanism needs to be demonstrated and it reveals itself to be a gross oversimplification. Global trends are global because they are globally supported. Emasculating Western academics would not lead to sudden flowering of disaster scholarship in the rest of the world. And in any case, is this not the Chinese century?

It is likewise an honour to respond to your rejoinder to my Inside Out commentary for the 40-year anniversary of Disasters. This piece is indeed provocative and I’d be very happy should it contribute to open up a debate on the epistemology and practice of disaster research. Your rejoinder is a first step in this direction and I am therefore very grateful. In fact, I agree with some of your points although I obviously stand by my overall argument.

I, in fact, agree that referring to the West as an homogenous entity can be problematic in some instances. It doesn’t reflect the complex reality of the world, indeed, and I obviously struggle with this in several instances in the paper (e.g. the use of OECD as a proxy and the positioning of China and Japan) but I also feel like this short paper wasn’t the appropriate venue to further this complex debate.

I rather focus on the core of the argument, which is why, to me, disaster research has not changed as much as it claims it has over the past 40 years. For example, one of my concerns is that most of the concepts that have been structuring disaster studies over the past decades indeed come from Indo-European languages and that these concepts have been rolled out in many other contexts where they do not necessarily make sense, which may have skewed our understanding of disasters (if such events/processes actually exist as we usually understand them) and hence how disaster risk reduction is considered.

I also agree that there is no single centre of power at one global level but multiple cores at many different scales. I only mention this in passing in the paper but the processes of marginalisation and unequal power relations between researchers that I discuss at the world scale happen at regional and national levels too, for example between researchers from the capital vs researcher from peripheral/smaller cities, including within wealthy countries of what I call the West. Regardless of the scale of core-periphery relationships in disaster studies these unequal power relations seem to involve consent (in Gramsci’s terms) on the side of those who have less power to make decision. As such, it is definitely a complex relationship that is surely not a one-way process.

In essence, it is the processes and relationships more than the actual location of centres of power and peripheries that matter in my argument. This is why I’m not suggesting to ‘emasculate’ researchers from the wealthiest countries/regions/cities/universities (again, in relative terms at different scales). For disaster studies to live up to its ambition I’m rather calling for more dialogue and fair collaboration where local researchers lead and outsiders support, meaning that the latter definitely have their own role to play still.

I am also very grateful to JC and to David for launching this important discussion.

Whatever the epistemological arguments might be, in practical political terms the result of using the term 'natural disaster' has two pernicious effects. Firstly, it naturalizes disasters in the popular imagination, drawing attention away from the social, economic and political forces that shape the way we live. Secondly, it acts as a smoke screen that obscures the responsibility governments bear for controlling the CREATION of risk by incautious investments, both public and private, control of corrupt buildiing practices, etc.

It is quite likely true that for those who study disasters and natural hazards the short hand phrase, 'natural disaster' does not affect the way they understand disasters. But they are professionals. Most people do not have the advantage or luxury of years of study of these things. So my objections are far less philosophical and more pragmatic.

That said, I return to my original gratitude for the debate. One thing that struck me in JC's response just now as the phrase, "... concepts that have been structuring disaster studies over the past decades indeed come from Indo-European languages and that these concepts have been rolled out in many other contexts where they do not necessarily make sense." He agrees with David on this, and so do I. What piques my interest is the first part of the statement. Would it be a luxury to spend time searching among the world's roughly 6,000 non-Indo-European languages for terms that bear in interesting ways on the English words hazard, threat, emergency, crisis, disaster? In fact, of the 445 living Indo-European languages, most of us never consider terms and concepts in most of them in our disaster and hazard studies. For example, the Spanish term coming out of Bolivia, 'bien vivir' I find valuable as a way of pointing to desirable security and livelihood policies, both of importance for reduction of disaster risk.

Prince, S. 1920. Catastrophe and Social Change: Based Upon a Sociological Study of the Halifax Disaster. Studies in History, Economics and Public Law no. 94. Colombia University Press, New York, 151 pp.