Theoretical Notes on Vulnerability to Disaster 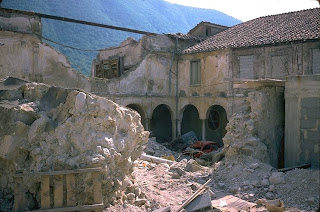 The word vulnerability is derived from the Latin vulnerare, meaning 'to wound'. Broadly, it refers to the exposure of a person, asset, good or activity to potential harm or loss (see Weichselgartner 2001 for a list of definitions of the term).

Several paradoxes are associated with the concept. First, vulnerability can be disaggregated for the purposes of analysis into sectors or components (such as physical, social, economic or psychological), but it is nevertheless essentially holistic--i.e. the whole entity suffers harm (Cardona 2004).

Secondly, like risk, vulnerability is a hypothetical concept, but one that nevertheless does not lack reality. It is simply not tangible: in the same way that in the physical world friction only comes into being when it is mobilised, so vulnerability only becomes manifest when it manifests itself as impact. This is one reason why the concept is difficult to measure. Confirmation of the existence of vulnerability is obtained post hoc by measuring the impact of disaster, or at least by inferring that past impacts will be diagnostic of future events. Vulnerability is thus a latent or inherent property.

One of the great achievements of disaster studies in the second half of the twentieth century was to establish that vulnerability is the principal component of risk (Hewitt 1983). In the more extreme formulations, hazard (the other main component) is regarded as merely the trigger of risk conditions, and vulnerability accounts for the bulk of the propensity to suffer harm. This formulation is commonly used when dealing with extreme poverty (Boyce 2000). As a result, it becomes easy to confound risk and vulnerability. Indeed, there is an element of circularity in the standard conceptual equation:-

The main consequence of this is that vulnerability can be difficult to isolate from risk. In part this reflects the complexity of socio-economic factors associated with the concept, as the physical connotations of hazard are often relatively straightforward by comparison. Essentially, hazard is active and vulnerability is passive. Hence, risk is not directly caused by vulnerability, but it is greatly, perhaps overwhelmingly, enhanced by it.

In the equation given above the role of exposure is contentious. The term 'exposure' has different meanings. In the insurance world it refers to the maximum liability for payment of compensation to policy holders (Van der Voet and Slob 2007). In the nuclear field it represents the length of time that a subject is at risk of receiving a dose of radiation, with or without some indication of the possible strength of that dose. In hazards studies, the simplest definition refers to the proportion of time that a person or asset is threatened by a particular risk (Lerner-Lam 2007).

Given the role of exposure, it is important to note that vulnerability is not an "all or nothing" concept. Many studies of risk conditions are based on the propensity for total losses. This, of course, assumes an utter inability to resist the impact of disaster. Resilience (or capacity, or coping) is a concept derived from rheology, the physical behaviour of materials, and it refers to the ability of a substance (or in this case of society) in balanced measure to absorb and resist the shock of impact. It is, of course, the inverse of vulnerability:-

Hence, vulnerability can be partial. If it is quantifiable it can be expressed as an index or percentage relative to total loss. If it can be assessed, categories may be used, such as severity of injury relative to lethality, or degrees of loss of the structural integrity of a building relative to total collapse. In any event, many hazard impacts mobilise only a portion of vulnerability. For example, very few earthquakes cause total devastation to a city, and the patterns of seismic damage in urban environments can be highly complex (Wisner 1999).

The ability to disaggregate vulnerability into different components indicates that it can take different forms. The field of business continuity management (BCM) is founded on the notion that vulnerability has different components, which apply, for example, to the supply chain, the manufacturing or production process, relations with clients, customers and suppliers, the market value of a company's shares, its position with respect to competitors and its reputation with investors and customers. Damage in any of these sectors can activate vulnerability in other categories (Kemp 2007).

One possible interpretation of vulnerability is that it can be defined relative to the circumstances that generate it. The following model breaks vulnerability down according to its context (Alexander 1997, Özerdem and Jacoby 2006):-

- Total vulnerability: life is generally precarious because little or nothing has been done to reduce the sources and potential impacts of risk. This condition tends to apply to poor and marginalised societies which lack the resources to protect themselves.
- Economic: people lack adequate occupation and hence vulnerability refers to the precariousness of their productive activities and sources of income.
- Technological or technocratic: caused by the riskiness of technology or of the ways in which it is utilised.
- Residual: caused by lack of modernisation, in which risk conditions evolve but mitigation strategies do not keep pace with them.
- Delinquent: caused by corruption, negligence or criminal activity that puts people or assets at risk.
- Newly generated: caused by change in circumstances, for example as a result of newly emerging risks.

Such is the complexity of society that these categories need not be mutually exclusive.

If vulnerability takes different forms or has different components not only will it be multifaceted but there will also be interaction between the components. Hence, it may be additive and there may be gestalt (i.e. the whole may be more than the sum of the parts). Chains of causality, interactions between the parts and collateral and secondary vulnerabilities may come into play. Thus we may define primary vulnerability as the direct product of cause and effect. For example, if an earthquake shakes a dilapidated house the poor quality of the masonry may cause the building to collapse. No gestalt is present. Secondary vulnerability, potentially with moderate gestalt, results from the interaction of causes or the occurrence of coincidences. For instance, a building may resist earthquake shaking but not the water wave caused by the seismically-induced breaching of a dam upstream. Complex vulnerability involves high gestalt and occurs when complicated interactions between components heighten overall vulnerability. The ramified economic effects of a major earthquake in a metropolitan city would produce this.

Vulnerability can be measured or estimated directly as potential for harm or loss. However, this requires hypotheses of the potential impact of events that have not occurred but are likely to. There is, of course, scope for inaccuracy in such theorising. It can also be measured indirectly as 'non-resilience'--i.e. the failure to be robust in the face of a threatening event. The fault trees and event trees used in the risk analysis of industrial processes are an example of this and could be adapted to other forms of investigation, for example with society.

Like risk, vulnerability can be chronic or catastrophic, depending on whether it results in widely diffused malaise or concentrated disaster. It applies to known risks, adapting risks, emerging risks and unknown risks. Whereas the process of investigating vulnerability in the context of the first of these is relatively straightforward, it becomes much more difficult when applied to adapting risks (e.g. those associated with climate change) and emerging risks (e.g. pandemics). It cannot be achieved for unknown risks, the ones that will emerge in future scenarios. The management of vulnerability must involve holistic techniques that take account of the categories in which it occurs and the different degrees and levels of interaction between them (Cardona 2004). This is necessarily so, as managing vulnerability with regard to single themes and cases will merely allow it to escape into other categories and will thus not reduce it. Holistic analyses must precede holistic remedies.

Vulnerability is susceptible to the dialectic of forces that act to increase or diminish it. The concept is not static but is continually modified by forces that amplify or mitigate it. Thus the vulnerability of settlement on a floodplain can be diminished by structural and planning measures but simultaneously amplified by building new structures that are at risk of inundation. Perception is the deciding factor, providing one takes into account its links with decision-making and action. Low or inaccurate perception of hazard can perpetuate vulnerability, while high perception can lead to its reduction.

Given the dynamic environment in which it occurs, measures taken to reduce vulnerability need to be sustainable. If they are not, it will inevitably climb back again.

Sustainable vulnerability reduction is locally based, supported by the community, well integrated into legislation and planning instruments and part of a grand strategy to make life more resilient for the inhabitants of the area in question. It goes without saying that resilience depends on sustainability (Wisner 2004).

Cardona, O.D. 2004. The need for rethinking the concepts of vulnerability and risk from a holistic perspective: a necessary review and criticism for effective risk management. In G. Bankoff, G. Frerks and D. Hilhorst (eds) Mapping Vulnerability: Disasters, Development and People. Earthscan, London: 37-51.

Wisner, B. 1999. There are worse things than earthquakes: hazard vulnerability and mitigation in Los Angeles. In J.K. Mitchell (ed.) Crucibles of Hazard: Mega-Cities and Disasters in Transition. United Nations University Press, Tokyo: 375-427.