Towards a Taxonomy of Disasters 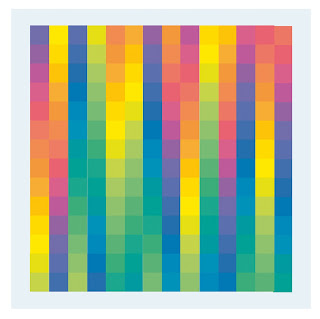 Taxonomy is the process of classifying things or concepts and is usually backed by principles. The study of disasters is a 'lateral discipline' that, to varying degrees embraces at least 42 other disciplines and professions (Alexander 2013). One result of having so many disciplinary perspectives is virtually to preclude consensus on the definition and classification of disasters and the concepts that go with them. NOr is it easy to find a set of common principles to underpin the classification. Hence, disaster studies has resisted taxonomy and perhaps is not amenable to any robust form of classification. However, the purpose of this note is to clarify, or at least explore, some of the issues. One of these is how we break down disasters into categories for the purpose of classifying them. Another is now we define the limits of the study of disasters.

Disaster is fundamentally a social phenomenon. While not independent of the magnitude of physical forces involved, it is not linearly related to them because it depends on the nature and size of the vulnerabilities that the physical forces act upon. Tierney (2008) provided a functional semantic classification of the size of extreme events (revised by Alexander 2016, p. ) and this might give us some basis for distinguishing phenomena by the magnitude of their impacts.

Early classifications of disasters tended to dwell upon the kinds of physical forces involved, and relate them to the geosphere, biospehere, hydrosphere and atmosphere (Tank 1976). The gradual dissemination of social studies prompted the addition of the noösphere (Vernadsky 1945). By the 1990s, the emergence of civil protection from the matrix of civil defence (Alexander 2002) had broadened the scope to the extent that there was a need for a more functional set of categories. I suggest the following five:-

(a) Natural disasters, caused by extreme natural events. Floods, storms and earthquakes dominate the picture, with the ever-present possibility of very large eruptions or extra-terrestrial impacts.

(b) Technological disasters, caused by malfunction or unintended consequences of technology. Included are toxic spills, transportation crashes and the effects of human error.

(c) Social disasters, including crowd crushes, riots and strikes among the providers of critical infrastructure.

(d) Intentional disasters, comprising all forms of terrorism and sabotage.

(e) Compound and composite disasters, in which the causes involve a mixture of any of the above. 'Na-techs' (natural-technological disasters) appear in this category (Krausmann et al. 2019). Some other indications of how categories (a) to (d) are linked are given in the following figure. 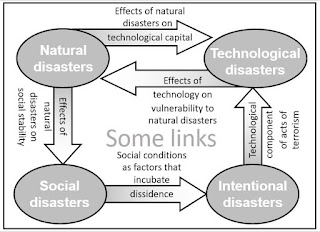 There is currently a move to extirpate the term 'natural disasters' on the grounds that disasters by definition are not natural events (UNDRR 2019, p. 165). This reflects a gradual distancing from the concept of disasters as 'acts of God', which began in the mid-1800s and has continued ever since. My viewpoint on this is that 'natural disasters' was only ever used as a convenience term intended to distinguish phenomena with a trigger in the natural environment from those with a technological origin (Alexander 1993). A more up-to-date rationale might state that "there is nothing more natural than human propensity to cause disasters." It should be noted that sub-fields of disaster studies may require their own classifications. For example, business continuity management has a slightly different set of priorities which induces it to change the emphasis among triggering factors (Elliott et al. 2010). The health sciences also have a different perspective (Myrtle et al. 2005).
The next question is where to draw the boundaries in the study of disasters and practice of disaster risk reduction. By convention, conflict, warfare and disease epidemics are excluded. Pandemics are included because many of the effects of a pandemic are likely to be socio-economic in nature. There is also a link between pandemics and the 'intentional disaster' of bioterrorism (Trufanov et al. 2010).

Currently, there is renewed interest in the relationship between conflict and disasters, or, if the reader prefers, conflict and other forms of disaster (e.g. Field 2018). Like disease outbreaks, conflict is a disaster in its own right. Why, then, do we not include it in disaster studies per se? The principal answer is that we would be biting off more than we can chew. The need to include military strategy and the strategic politics of defence in our studies would unbalance them. Another reason is that disaster response has undergone a long-drawn-out process of civilianisation. We do not wish to see it dragged back into the military sphere. A third reason concerns the need in the field to separate military (or "defence") missions from humanitarian ones carried out by military forces. In conclusion, the military ethos is not a suitable basis upon which to build modern disaster risk reduction, which is in no sense a devaluation of the existence of military forces, but is instead an observation on the separation of roles.

Other phenomena that lie outside the remit of those who study disasters, but not far outside, are climate change and migration. There is no doubt that climatic warming and species collapse are very special kinds of disasters with long-term consequences that can scarcely be contemplated. Warming has already begun to have a substantial effect on the magnitude and frequency of meteorological hazards. Migration could conceivably be the result of major disasters, not merely of climate trends (as they affect the carrying capacity of areas of land) and of conflict, oppression and political hostility. However, again, there is a need to draw a line and thus to regard these as parallel or kindred phenomena, with which there is much interchange, but they are not within the fold of disaster risk reduction sensu stricto.

Finally, there is a very basic distinction between disasters, which are events that tend to be concentrated in space and time, and diffuse events such as road accidents. Paradoxically, there are countries, such as Iran, in which the death toll on the roads is far higher than that in major disasters. This should not be used as an excuse to reduce the priority of disaster risk reduction, but it does not mean that DRR should include basic quotidian road safety. The argument for not including minor accidents in disaster studies is surprisingly weak. For example, work by Marulana et al. (2010) showed that in Colombia the combined effect of 20,000 small destructive events was much greater than the socio-economic impact of five large disasters. Moreover, disasters such as drought can be neither concentrated in space nor abrupt in time, and in this respect they bear some resemblance to small accidents. However, spanning the continuum from major incidents to catastrophes, disasters are discrete events and are not diffused throughout society as are accidents. Of course, major accidents are disasters.

The following are some principles on which a taxonomy of disasters could be based.

1. We classify disasters in order to deal with "more manageable conceptual units."

2. Associating particular kinds of disaster with classes of event obviates the need to restate basic information every time we deal with such phenomena.

3. Classification focusses attention on the mechanism that starts off the disaster. As part of a progression of thought and analysis, attention can then proceed to the root causes and dynamic pressures.

4. In classifying disasters there is a distinction between neutral forces, human error or negligence, and human malevolence. This is useful to maintain and is inherent in the basis of the classification.

5. Disaster risk reduction policy is heavily influenced by the class of disaster involved. For example, counter-terrorism policy and policy against natural hazards can be quite different.

6. Taxonomy can start with basic distinctions (natural, technological, social, intentional and composite) and then proceed to further divisions and subdivisions.

Conflict, migration, minor accidents, epidemics, general health conditions and climate change are thus outside the perimeter of 'disaster risk reduction'. This does not diminish their importance or the strength of the links that they have with DRR. The rationale for excluding phenomena from the disasters field may be weak on logic, but it is essential if we are to give the field identity, cohesion and a firm theoretical basis.

Field, J. 2018. Divided disasters: examining the impacts of the conflict-disaster nexus for distanced crises in the Philippines. Disasters 42(S2): S265-S286.