The Institute of Civil Protection and Emergency Management

Let us consider some examples. The UK's Royal Geographical Society (RGS) is a quintessential learned society. It exists to promote geography in all relevant guises and places. In the 1970s, the RGS worked alongside the Institute of British Geographers (IBG), which had been founded by university academics to promote interaction among those who teach and research geography (although school teaching was the preserve of another professional association, the Geographical Association). At a certain point, the RGS merged with the IBG. This did not preclude non-academics from becoming members and fellows of the resulting organisation (named the "RGS with the IBG") but it strengthened both as a result of joining forces. Both organisations retained their own journals, which had acquired different characters (nevertheless, it is hard to say that the IBG journals are more 'academic' than the RGS's flagship Geographical Journal).

The Geological Society of London (GSL) began in 1807 as a fairly loose association of gentleman-enthusiasts for geology. It grew into a major authority on geological matters and in 1991 absorbed the Institution of Geologists, which was the apposite professional association. The GSL provides the chartered geologist route to accreditation. Organisations such as the British Psychological Society (with 60,000 members) provide a focal point for knowledge, influence and identity in the given field and thus acts more as a professional association.

From this we can see that these organisations seldom seem to want to maintain a distinction between learned society and professional association. A strong mission to further their discipline or profession means that they will offer any services they think are appropriate and in demand by their membership.

The Institute of Civil Protection and Emergency Management (ICPEM) was born in 1938 as the Institute of Civil Defence. This is a field that, in its modern form, was effectively born in 1937, the year before ICD was founded, when the first concerted aerial bombardment of the modern era occurred in Guernica, northern Spain, and there were semi-improvised efforts to protect the non-combatant population. In point of fact, the idea of absorbing non-combatants into safe zones had gained traction in the 1930s, but it did not produce a civil defence body until 1958, when the International Civil Defence Organisation was founded in Geneva. ICD was effectively an association for the nascent profession of civil defence operative. Yet when it later became the Institute of Civil Defence and Disaster Studies (ICDDS) it adopted as its motto "excellence in disaster research" - the badge of a learned society. In 2009 ICDDS became ICPEM, but it retained the motto.

What should a learned society do to distinguish itself from a professional association? Perhaps before answering that one should ask, why would it want to distinguish itself in that way? The premier learned association is the Royal Society [of London for Improving Natural Knowledge - to give it its full title], which was founded in 1660. There is no doubt that the Royal Society is more prestigious and therefore carries more weight than other bodies that unite scientists, academics or people from the professions. Hence, there may be something of a desire to emulate it. Other than that, there is little in the way of a reason. A learned society must care for knowledge, a professional society for people, but there is no reason why it should not also be the other way around. Societies that are keen to thrive and grow are usually also keen to cover as many bases as possible within their fields, and to provide as comprehensive a set of services as possible.

As a learned society, ICPEM can trade on the fact that it is the oldest such body in this field in the world, older than, for example, the International Civil Defence Organisation. It has a more modern name, one that is entirely appropriate to today's emphasis on grass-roots emergency planning and management, and collaboration rather than authoritarian chains of command. The best way that ICPEM can fulfill its mission is to provide fellowship (in the broadest sense of the term) for those people whose professional or academic interest is civil protection or emergency management, and help to preserve, share and encourage the knowledge that they need to acquire or can offer. The best benefit from being part of ICPEM is to be part of a common process in which knowledge in its many forms is generated, developed and shared.

Publish, Perish and be Damned 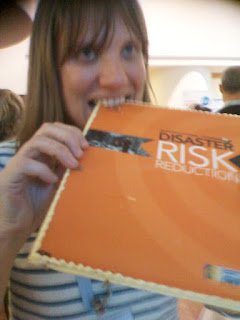 A journal that is good enough to eat - Launching the IJDRR with a Swiss chocolate version.


We live in an age in which there are many inverse relationships between quantity and quality. One of these is in academic publishing. The journal I edit and helped found (the International Journal of Disaster Risk Reduction) rejects about 70 per cent of papers submitted to it. Last year (2016) there were 750 submissions. In 2017 it is estimated that at least 1,040 papers will be submitted. Perhaps 700 of them will not appear in print because they are not of an acceptable quality.

I have been a major journal editor continuously since April 1985. I long ago concluded that at least three fifths of academic publishing is motivated by personnel considerations. Scholars publish in order to get a job, retain a job or obtain promotion. Relatively few are lucky enough to be able to publish for the sheer fun of it, or for reasons of pure creativity.

When I started as an editor, the motivation for publishing rested largely with the author. Now it is almost exclusively a function of institutional impetus. Researchers publish because they are forced to: it is a requirement of their employment. In many cases, the requirement is tied to the usual absurd bibliometric parameters such as impact factors, 'upper quartiles' and so on. The least important consideration seems to be what is actually in the articles - i.e. the scholarly content.

Academics may be taught to carry out research, but they are not taught to publish, or at least not properly taught. It is amazing how little authors seem to understand about the process of seeing their work into print (digital print, as things now are). The great "advantage" of digital publishing is that with very small increases in costs one can now have colossal amounts of uninteresting, uninnovative research at one's fingertips, with search engines and portals that make it a piece of cake to ignore all this work.

In much academic writing there is a great lack of professionalism. Very many authors submit articles for peer review with badly constructed, appallingly written abstracts, clamorous grammatical errors in the title, and so on. Then they wonder why no one wants to do the peer reviewing! Most authors ignore a journal's style requirements and in formatting terms few produce well-constructed manuscripts. I suppose an author might ask why this matters, given that the message and the content of the article are the real matters at hand. Well it does matter. Editors and referees cannot entirely free themselves from forming opinions based on the appearance of an article.

A good article is carefully laid out, double spaced, with page numbers and non-intrusive line numbers. The references are properly cited and listed, and care is taken to make sure that they are complete and in the proper format. Tables are well laid out, figures are fully legible, and the language in which the article is written is good enough for an international audience. This means that it is free from slang, syntactical contortions and grammatical errors (see below).

Sending in a well-formatted article (or book manuscript, indeed) betokens a sensitivity to the needs of the reader. Yet we who habitually read academic manuscripts have to cope with all sorts of horror. One of those that upsets me the most is the manuscript that, thanks to advanced word-processing capabilities, is formatted as a facsimile of a published manuscript, complete with the journal's masthead banner and two-column pages. Evidently the author thinks that this will increase the paper's chances of being accepted. Not on your life! If it is eventually accepted, I feel pity for the copy editor and typesetter who have to unravel all the formatting so that they can start again with publishers' software.

The other common problem, and increasingly so, is that in disaster risk reduction, too many manuscripts are being submitted for publication by people who do not have enough background and learning in this field. One only has to read the first quarter or third of the paper to find this out, when it becomes apparent that (a) the authors have not considered the principal literature on the topic they are writing about, (b) they are unaware that much of their study has been done before, in some cases decades ago, and (c) the literature review, which should be the basis of or starting point for their analysis, is nothing of the sort. It all contributes to the tendency to "reinvent the wheel" which is such an 'industrial disease' of disaster studies.

Writing is a process of communicating. Like all communication, it is useless to talk to an interlocutor in a language that he or she does not understand. Comparatively few academic authors seem to think about the effects of communication from the point of view of the reader, listener or viewer. It is not a one-way, one-sided process.

Put together, all of this adds up to a 'per capita inspiration gap' - more to read, but less to learn from it. Let us do what we can to reverse the trend, bring back the creativity, instil the professionalism, and stick two fingers up at the institutional requirements that have done so much to "dull down" science. 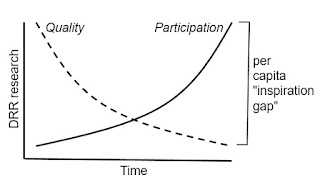 
Typical errors that occur, and recur, in academic papers written in English (or a species of English) are the following. All of these are avoidable defects.