Figure 1. Meaning and acceptance of disaster in historical context. 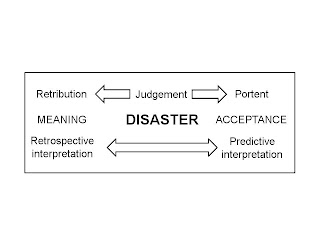 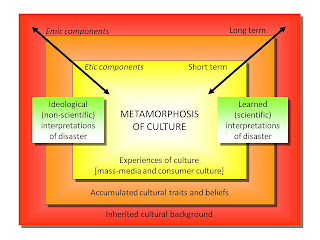 Figure 2. Metemorphosis of culture in the context of interpreting disaster.

Since 1920 an impressive body of disaster research has built up in the social sciences. Cultural ecology and social adaptation to risk have been studied in great depth (Oliver-Smith 1998); so have social relations in disaster (Perry and Quarantelli 2005) and perception of hazards (Johnson and Covello 1987). However, the body of theory may be large and authoritative, but much of it relates to a world that has been swept away by the march of history. The heyday of theory production in hazard and disaster research extended from the mid-1960s to the 1970s (Barton 1970, White 1974). In this period the canons of human ecology and social relations in disaster were established (Burton et al. 1978). Since then, the world has moved on and many dearly-held tenets of research have been called into question by the relentless tide of information and communications technology, globalisation, promotion of ideology, and environmental imperatives. It is time to update theory to reflect the new realities of the 21st century world.

There have, of course, been attempts to tackle this problem. Mark Pelling (2003) called for theory that can help us understand and interpret globalisation. Some years earlier Ulrich Beck published his theory of the risk society (Beck 1992) and, as it is considered to be the principal post-modern theory of risk, it has been debated ever since. However, I argue that we do not live in a risk society: we live in a vulnerability society. There is a fundamental difference between the two perspectives: the former looks at society as technocracy from above, the latter from below, from the point of view of the vulnerable, the inveterate risk takers not the people who exercise choice.

Technology can lead us to a new post-modern interpretation of risk and disaster concerned with the ways in which it propagates meaning. Modern life involves vast new challenges in the search for meaning, huge perturbations in the human condition. Symbolism is a form of iconography or semiotics. It involves meaning as reduced to symbols, or concentrated and encapsulated in them (Jung 1964).

In recent decades the volume, flux and scope of the information that is available to people have all increased beyond any reasonable means of measurement. Unless technological collapse were to occur--which does not currently appear probable--the increase is set to continue. The pace of change is exemplified by the geometric progression in the calculating and memory power of integrated microcircuits ("Moore's law"--after Moore 1965). Humanity cannot adapt fast enough to the consequences of such changes. Full-scale adaptation would require the wholesale abandonment of cultures and large accretions of beliefs. It would require people spontaneously to free themselves from credos and superstitions, which has never yet occurred in human history.

Instead, inherited beliefs can condition people's view of disaster. At the root of this, natural calamity was once seen in a very narrow view symbolic manner based on judgement, retribution and portents (Figure 1). This constitutes one common aspect of the inherited cultural background that fuses with modern etic (i.e. universal) cultures in the process of cultural metamorphosis that is so important to the ways in which risk and disaster are perceived (Figure 2).

One of the most striking changes of the early 21st century is the realisation that problems can be solved by the instantaneous application of concepts and techniques developed very far away, through information and communications technology. This is the concept of real time. In the 1960s the geographer William Bunge (1966) started a conceptual revolution in his discipline by showing that spatial relationships were no longer literal and defined by distance in a geopolitical world in which the war front could be anywhere that an intercontinental ballistic missile could reach. The nuclear threat has relaxed, or perhaps merely changed, but Bunge's geographical topology has since become vastly more complex and significant. It is now relatively easy to involve oneself in the affairs of distant places and to make instantaneous connections.

In a highly networked world we cannot make sense of vast fluxes of information without symbolism. The pressure to interpret information has become so intense that we are creating a cartoon world of stylised relationships. It is highly amenable to symbolic interpretation, which is constantly facilitated by the accelerating pace of life.

Nonetheless, older views of disaster survive unscathed and thus coexist with the new (Figure 2). In the modern world vast populations survive with no piped water or electricity supplies. Yet even in such cases technological change has not been completely absent. Mobile telephony and internet access, for example, have penetrated some highly unlikely places. Cultural metamorphosis with a technological basis may be proceeding at different speeds in different places, but it is inevitable. It paves the way for new forms of symbolism. Perhaps it will turn out that the greatest luminary of disaster studies in the 20th century was the psychologist Karl Jung (1964).

The value of a symbolic interpretation

The first benefit is, of course, a greater understanding of people's perception of and relationships with disaster. No orders can be issued and effectively acted upon, no laws will successfully protect society, without taking into account people's perceptions, because these are what govern their predilections, choices and actions.

In the first place, symbolism equates with money. People will spend their wealth on things that have high symbolic value. The positive aspects of this involve donation, acquisition and economic support. In a negative manner there can be disequilibrium in investments and expenditures and support for inefficient forms of risk aversion (Peterson 2002). Governments will spend money because voters demand action, and that too can be related to symbolic interpretations. For example, accidents in the transportation field have had significant impacts on expenditure to reduce risks and increase safely, in some cases quite independently of the technical and economic arguments for investment but merely because public perception demands that particular ghosts be laid (Perrow 1984).

Secondly, symbolism encapsulates the essence of meaning. In the 21st century world old certainties have been swept away. Let us not underestimate the importance of the search for meaning in countless human lives that are caught in the resulting melee. One of the weakest, yet most pervasive forms of symbolism is numericism, love of numbers, or quantification of all things. Targets, statistics and quantities are a constant accompaniment to modern life. Sometimes they are vital or at least valuable, sometimes they are misleading or fraudulent. Amid the spread of rationalism--sometimes specious rationalism--measurements are the tools of influence, and sometimes the facilitators of modern conflict. In the worst case quantification is a damaging form of obfuscation (Alexander 2000). In the best case it can offer overwhelmingly convincing arguments for action and change. Through its reductive nature it is, however, one of the forms of symbolism.

Thirdly, over the last 60 years celebrity has become the life blood of mass media communication. Its power should not be underestimated. Celebrity has become a substitute for local curiosity. For many people it represents the idealised projection of their own personae, or at least the object of their fascination. In the modern world celebrity is increasingly powerful. In the most extreme cases it amounts to a pseudo-democratic form of unelected leadership. In many instances elected representatives are seen as less able, and less responsive, than entertainment celebrities, who have gradually increased their position as foci of change. Celebrity is intimately linked with popular and political views of disaster (Bronfen 2001). Moreover, celebrity is redolent with symbolism, much of it heavily manufactured by the entertainment industry and cultural organisations through astute use of the mass media.

Thus, symbolism can embody people's hopes, aspirations, fears and phobias, and a significant portion of their beliefs.

How can we use the symbolic interpretation in favour of disaster risk reduction?

First of all, it should be treated as a factor to reckon with. Media mean money. So do opinions, beliefs, communications and all the paraphernalia by which symbolism is propagated. Decoding symbolism is the key to how people react to risk and disaster--as risk takers, victims, donors, decision-makers, and so on. That process is the key to interpretation for policy, planning and action in disaster risk reduction and emergency response.

Symbolism could be used positively. Disaster risk is becoming increasing salient. In commercial culture branding and marketing have become so pervasive and spread so far that symbolism is the essence of commercial activity. Unwittingly, people have become accustomed to it. It has become second nature and the power of brands is overwhelming. In the same manner symbolism can be used to produce and promote a culture of risk reduction.

Symbolism is potentially the key to a new post-modern understanding of the social impact of disasters. This could be achieved by interpreting the role of symbolism in conditioning the pervasive new means of mass communication. Much work needs to be done to codify and amplify such interpretations and to consolidate the model. However, as profound changes in the technological underpinnings of modern life have occurred, the pace of cultural metamorphosis has accelerated. It is therefore imperative that new theory be made to help us understand the social, cultural and economic impacts of disaster in the 21st century.

Oliver-Smith, A. 1998. Disasters, social change, and adaptive systems. In Quarantelli, E.L. (ed.) What is a Disaster? Perspectives on the Question. Routledge, London: 231-233.