Disaster Goes to School in Italy 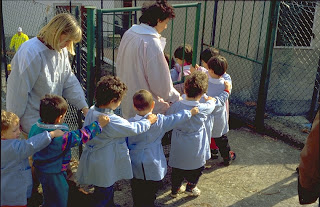 In Italy there are 51,674 schools. Sixty per cent of them were constructed before 1974, when anti-seismic building codes were first applied to such buildings. Also, 44 per cent of them have no certificate of structural safety for non-seismic (i.e. static) conditions. One in ten schools (10.3%) is built to antiseismic standards. More than one third of children at school (38%) do not know whether they live in a seismic zone or not. Three fifths (59%) do not know whether their school has an emergency plan (it most probably does not). Two thirds of students (64%) would have no idea whatsoever about what to do in an emergency at school. In the tiny minority of cases in which schools have an emergency plan, it usually only refers to evacuation, and has probably never been tested or made known to participants.

A recent survey of high schools in the circum-Vesuvian area indicated that volcanology and volcanic risk (and also seismic risk) are not included in any way in the curriculum.

After a school collapsed at San Giovanni di Puglia (CB) in 2002, an emergency survey revealed that 6,000 Italian schools in highly seismic zones were extremely vulnerable to collapse in earthquakes. Funds were made available for limited emergency work to improve the structural stability of one third of them.

In recent years, children have died in structural collapses in Italian schools, on occasion under static conditions and not during earthquakes (for example, in the lethal, spontaneous collapse of a classroom at the Rivoli Lyceum, near Turin, in November 2008). Clearly, the potential exists for a major disaster. I have visited schools in highly seismic zones (e.g. the Naples metropolitan area and the Tuscan Lunigiana mountains) which are obvious death traps. I have also worked with school teachers on problems of emergency management, most recently in Umbria. The attitude I have most consistently encountered has been one of complacency and indifference. The tiny minority of school teachers who care about the problem see it as unsolveable because there is no support for any initiatives, either from school authorities or among  parents.

Recent earthquakes in Emilia have put the spotlight on the seismic safety of schools. Once again, disaster at school has been avoided by a lucky combination of circumstances, not by good planning and serious investment. One is sceptical about whether the nation's attention span is long enough to transform the current debate into a clear plan action--and actually follow it.

In reality, good emergency planning for schools is a sophisticated process that requires skill, persistence and widespread participation.* I wish it were considered worth doing. Initiatives have been launched, for example in Como, both to make Italian schools safer by planning and exercising, and also to use school teaching as a means of raising the consciousness of families about major hazards. It is a great pity that they are so sporadic.

Disaster is always followed by a chorus of lamentation and a welter of accusations. This process of being wise after the event, and naive before it, is a sign of immaturity in the disaster risk reduction system. It is time for change.

Carlino, S., R. Somma and G.C. Mayberry 2008. Volcanic risk perception of young people in the urban areas of Vesuvius: comparisons with other volcanic areas and implications for emergency management. Journal of Volcanology and Geothermal Research 172(3-4): 229-243.