Reflections on the Haiti earthquake of 12 January 2010 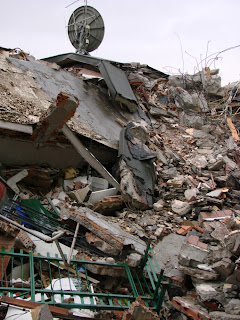 As I write, a major earthquake has once again caused devastation in yet another country afflicted by poverty and destitution. Haiti is a country of ten million inhabitants, the poorest in the western hemisphere, ranked 149 out of 182 in UNDP's Human Development Index, with a per capita GDP of $610, a life expectancy at birth of 61 years and an adult literacy rate of 62 per cent. The statistics are too arid to say much about the suffering. Moreover, Haiti has frequent floods and occasional hurricanes, such as Jeanne in 2004. It had no major earthquake between 1770 and 2010, but that is typical of seismic 'gaps' at the tectonic plate margins, areas where strain builds up to the point of a mighty rupture.

The 12 January 2010 earthquake was powerful (M=7.1), shallow in its focus (initial point of rupture in the earth's crust) and with an epicentre only 16 km from Port au Prince, a metropolitan area that contains one fifth of the national population. As I write, three days after the earthquake, there is no indication of the magnitude of the death toll. It will probably never be known in detail, such are the problems of record-keeping in places like Haiti.

Whereas major disasters may absorb something like 0.2 per cent of the resources of a rich country, the proportion may be orders of magnitude larger in poor nations. Both Haiti and Nicaragua have had their economic development set back by decades as a result of the devastation caused by natural disasters, including the loss of employment and infrastructure, and the unsustainable burden of recovery. In fact, with the addition of political and military instability, and corruption, some parts of Managua have never been reconstructed after the 1972 earthquake.

On the positive side, the occurrence of a major natural catastrophe--a politically neutral phenomenon--is a good opportunity to reinforce processes of reconciliation and governance-building by international "disaster diplomacy". On the other hand, the international community has not shown much interest in investing heavily in disaster prevention, even after major events have graphically demonstrated the needs. For example, when eight Caribbean and Central American nations were affected by Hurricane Mitch in 1998 the rich countries organized an aid package that cost less than three per cent of what they were spending rescuing hedge fund investors--i.e. unsuccessful financial market gamblers--on Wall Street. One can only hope that the new emphasis on disaster risk reduction in the arrangements for managing climate change at the world level will have some positive fallout for earthquake damage prevention.

Vulnerability to disaster is an innate property of people and things that is difficult to measure. By analogy, like friction it is mobilised by events: hence, it materialises as impact when hazards become disasters. Suddenly, the seismic vulnerability of Haiti is revealed in the aftermath of a catastrophic disaster that has caused wholesale destruction on a scale that is seen relatively rarely (Tehran, Istanbul, Kathmandu and Tokyo are among the few places that could end up surpassing it). In Port au Prince many of the main strategic buildings have collapsed, including the National Palace, the Pétionville Hospital and the UN MINUSTAH headquarters. The shanty towns of the poor are devastated in a manner that is seldom seen in more substantial, more permanent forms of vernacular housing. Loss of life has been devastating, not merely among ordinary citizens, but also among key foreign and domestic personnel. One can only hope that the international community will mainstream disaster risk reduction and help Haiti to rebuild an infrastructure in which the key elements resist impacts sufficiently to enable the rest to be saved in future disasters.

Up to 90 per cent of the deaths that occur in earthquakes fall in the world's poorest countries and regions. The only reason that these areas do not account for the largest proportion of the costs of damage is the poverty of their assets: hence, sums of money are no measure of the degree of suffering. Poverty and disaster vulnerability are not quite synonyms. For example, some of the poorer villages of Nepal have become quite organized to defend themselves against floods and landslides. Human ingenuity has enabled at least some poor communities to better their circumstances and create their own resilience. Good governance is the key to progress. Regardless of the financial constraints, a sense of participatory self-determination is always beneficial to disaster risk reduction. Civil society, public administration and businesses need to work together under the precepts of the Hyogo Framework for Action, 2005-2015, the United Nations' blueprint for disaster reduction. The example of Afghanistan (another of the world's most seismically hazardous countries) is seminal. Lack of security, stability and governance has effectively prevented the creation of civil protection structures and the only in-place alternative is mere improvisation.

The international community is sensitive to the issue of major natural disasters. Moreover, with climate change, sea-level rise and the intensification of meteorological phenomena, it is clear that disasters will be larger and more devastating in the future unless resilience is boosted. However, although there has been much discussion of the need to switch from reacting to disasters after they have occurred to instituting prior prevention measures, this has hardly begun to happen. Thus the earthquake of 2001 in El Salvador was in many ways a repeat of the 1986 Salvadorian earthquake, including in some of the relief measures.

Restricting the discussion to the most immediate forms of assistance, the convergence of up to 2000 foreign search-and-rescue specialists from all parts of the globe, necessary as it may be under the circumstances, is simply not an efficient way of saving the lives of people trapped and injured by earthquakes. Few rescuers arrive before 36 hours have gone by and average survival times under rubble are usually well under 24 hours, perhaps below 12 hours, depending on local conditions. The cost per life saved of foreign rescue, medical and field hospital resources is extremely high relative to what could be achieved if capacity were available locally. As we know very well where the world's biggest natural disasters are likely to occur, it is time that a concerted international effort were made to encourage local preparedness. If it cannot begin with prevention, then at least let us build up the capacity to react locally. This means transfer of technology, equipment, expertise and training to where they are likely to be needed, plus efforts to ensure that readiness is permanently maintained. This is sustainable disaster preparedness: it needs willpower, organization, tenacity, generosity and undivided attention. Unless those qualities are forthcoming from the international community, the next major disaster will bring forth the same dreary story, in which predictable miseries are described as if they were unexpected and unfathomable.
Posted by Professor David E. Alexander at 17:53