How to Write an Emergency Plan 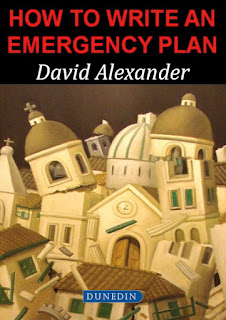 
In 2002 I wrote and published a book entitled Principles of Emergency Planning and Management. At the time, several volumes were available that dealt with how to prepare for and respond to emergencies, but they tended to be tied to particular systems. In fact, most of the available books were based on the American system of emergency response. That was all very well, but most countries do not have a Federal Emergency Management Agency. In those nations which lack a federal structure, the balance of powers between national, regional and local authorities can be very different from the way it is in the United States, and thus so can the national emergency management system. My book of principles was designed to show that there are fundamental challenges, issues and practices that transcend the prevailing administrative system. Emergency management is not the same in any and every country, but the different systems have much in common and respond to universal needs for safety, rescue, care and recovery.

Principles was well received but some of the feedback I received from readers suggested that they would welcome a more hands-on practical book. Rather than write a second, updated edition of the Principles volume, I decided to develop a book entitled How to Write an Emergency Plan. The principles that govern the process would still be there, but emphasis would be given to the practical steps in formulating, maintaining and using emergency plans of various kinds.

Every so often during my 36-year career as a "disasterologist" I have encountered people who have been thrust into the role of emergency planner with little or no preparation. Some of them have had experience of responding to emergencies; others have been entirely new to the field. A common question was "where do I start?" I have met people from all levels of public administration (local, regional and national) and from private companies who have been in this predicament. In writing the book my aim was to provide them with some guidance, and for those people who are already experienced emergency planners. I also wanted to show how emergency planning is special, and why it is worth doing.

The paradox of writing a book of this kind is that I am not sure I believe in emergency plans. In many instances, they are bound to fail. However, as the book states right at its starting point, the precious--indeed invaluable--element is the planning process. It is a means of learning about emergencies, the urgent needs that they create and the ways in which those needs can be satisfied. Emergency plans may need to be adapted to the unique circumstances of a particular crisis, but the process of creating a plan should force the planner to confront many of the issues that stem from the need to prepare for future emergencies. Failure to confront them could be construed as negligence, when equipment is not available, personnel are untrained, command structures lack functionality, and so on. So many things about the next emergency can be predicted from previous crises, and if we heed the lessons we will be more resilient and better prepared next time around.

The 'bedrock' level of emergency planning is that of municipal government. In one sense, even the very largest disaster is a local affair, because its effects will be felt at the scale of neighbourhoods, villages, towns and cities. Although I did not concentrate exclusively on municipal emergency planning, I treated it as the basic model because most other scales or types of planning must refer to the municipality as the basic unit of response and command.

The basis of the book is the generic, multi-hazard plan that every local authority ought to have, an instrument that is adaptable to both the known, anticipated hazards and the unanticipated ones that strike out of the blue. The core chapters of the book explain, step-by-step, how to construct such a plan. However, the longest chapter in the work is dedicated to the various kinds of thematic plan. Airports, hazardous industries, hospitals, museums, they all need emergency plans, and the various plans need to fit together so that the response to the next emergency is seamlessly 'joined up', rather than disconnected. There is also a need for emergency plans for particular functions, such as medicine supply (pharmaceuticals) and veterinary response, and particular sorts of person, such as those with disabilities. These are, of course, dealt with in the book.

Emergency planning is a lively field which is continuously evolving. The threats, hazards and challenges that the emergency response community--and the public--face are changing at an ever faster rate. Constructing, maintaining and using an emergency plan offers an opportunity to improve the services that provide safety, security and rescue to those in need. There is also a chance to decide what the priorities should be when scarce emergency resources need to be deployed. Thinking over these issues, and many others, How to Write an Emergency Plan was an interesting book to put together and for me it was a continuous learning process.

The Principles book is now 14 years old and it has weathered quite well, despite the momentous changes in society and hazards in the meantime, and the constant evolution of emergency response worldwide. In How to Write an Emergency Plan it now has a partial successor, but there is unfinished business: it is time to think about a book called How to Manage an Emergency.