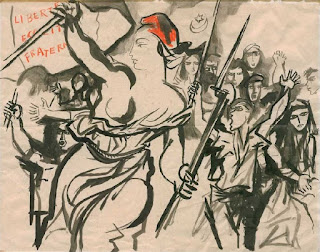 In cultural-historical terms, Sicilians divide people into two kinds: furbi and fessi - cunning and gullible. No one wants to be considered fesso. Indeed, not many people are happy to be labelled as furbo either. It is a hard distinction, but dura lex, sed lex. Such is modern democracy that, in Britain for instance, elements of the population have developed a tradition of voting against their own interests. Many who voted for the party of Margaret Thatcher in the 1970s and 1980s voted themselves out of a job and into penury: dura et falax lege. In the Americas, in the Middle East, in Russia, democracy currently enables the electorate to vote against democracy.

This is nihilism. The Oxford English Dictionary offers the following as its second, practical definition of the term: “Total rejection of prevailing religious beliefs, moral principles, laws, etc., often from a sense of despair and the belief that life is devoid of meaning. Also more generally: negativity, destructiveness, hostility to accepted beliefs or established institutions.” It is not quite the same as anarchism, the hostility to government, but, as Alan Bennett once wrote: "We started off trying to set up a small anarchist community, but the people wouldn't obey the rules." The curious thing about anarchism is that it requires organisation to destroy organisation in this way. Nihilism is an innate phenomenon that requires nothing except hostility, grievance and an urge to destroy. It is a form of political self-harm.

In previous posts I have discussed the need to interpret disasters in terms of context. I have made the point that some of the most relevant context has nothing to do with disaster risk reduction (DRR) at all. If people are vulnerable, abating vulnerability to disasters will not necessarily make them any less vulnerable. This is the ‘egg hypothesis’, in which DRR is the yolk and context the white. Sometimes it is a well-fried egg with sharp boundaries between the two parts.

Modern capitalism and neoliberalism have led to a concentration of wealth, as never before, in fewer and fewer hands. Democracy, the means by which we control our own collective future, has rarely if ever seemed more futile. Community, a much vaunted concept, has been comprehensively criticised and on occasion it has been cited as the means by which people are kept in order and their creativity and self-determination are kept in check (Titz et al. 2018). Nihilism is a reaction fo the failure of politicians and political parties to act with probity and resolution in order to improve the living conditions of the electorate. It is a product of ignorance and anger. It cannot be described as rational.

My point in this short essay is a simple one. I hope it will become an agenda for research, but the challenge is a difficult one. Nihilism is extremely important in current affairs at the moment and in the future it will probably have a more profound effect on our lives than many other preoccupations of the current moment. It severely weakens the strength of democracy and the ability of people to respond collectively to stresses and threats as these arise. Klein (2008, 2015, 2018) and Loewenstein (2017) have documented in great detail how disasters are used to impose anti-democratic measures when people are weakened and preoccupied by catastrophe. Nihilism makes this worse and can fatally undermine resistance.

As threat, risk, impact and aftermath, disasters must be dealt with democratically. Decision making in disasters must not be separated from the consensus values that democracy requires of it at other times. Yet there is a highly complex relationship between democracy and disasters (Platt 2012). Nihilism is not the way to simplify it. Let us study the effects and the prognosis for nihilism and disasters, and on the basis of our data and our analysis, let us join the fight for a rational, equitable system of values to replace the nihilism.

Klein, N. 2015. This Changes Everything: Capitalism vs. the Climate. Penguin, Harmondsworth, 576 pp.