A man walks into a room 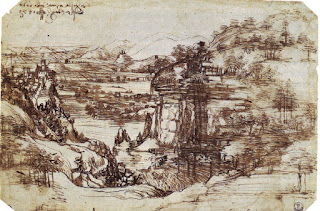 A man walks into the room. He is extremely handsome and quite tall (at least for his time, about 520 years ago). He is neither fat nor thin. In fact he likes his food and drink, he is fond of convivial dinners with good food and wine. His circle of friends is small but select, much more so than his large circle of enemies and opponents. One of his friends is his neighbour, Lisa Gherardini. She comes from an ancient but penniless Florentine family and lives in rented accommodation in the same street as his father, near Santo Spirito, Oltrearno. She is married to a cloth and silk merchant called Francesco del Giocondo and has five children (her sixth child was stillborn). They live modestly on his earnings from trade and hers from the income of a small farm. Our man likes her for her shy and slightly enigmatic smile. She goes on to outlast him by more than 20 years, and also to outlast her husband, who dies young of bubonic plague. This leaves her no option but to retreat into her preferred nunnery, Saint Ursula (Sant'Orsola), where two of her daughters have already taken orders. When she dies there, she is buried in the central courtyard–until 2016, when her remains are dug up. Why is that? Curiosity... If you are curious too, you can visit Sant'Orsola, which is a massive complex that occupies a whole city block in the centre of Florence. Or rather, you can't visit it without using a pneumatic drill and a sledgehammer, as due to a dispute over ownership, for decades all the doors and windows of the building have been bricked up. It has quite a sinister appearance. Lisa could never know that her smile would become the most famous in the world, roundly outclassing that of Marilyn Monroe.

But I digress. Our man's other friends include Giorgio Vasari, the influential painter, architect, biographer and historian, Andrea del Verrocchio, painter, sculptor and goldsmith, who was his maestro, and a fresh-faced young man with curly hair called Raffaello Sanzio. Raffaello became a well-respected painter (although a remained a thoroughly feeble poet). He could never know that even his preparatory sketches would eventually fetch more than $50 million each at auction.

Our man has long, blond hair–or is it blond? It has a reddish tinge, which leaves him open to much ridicule both in the streets and at fashionable gatherings. His eyes are blue. No, they are not piercing, but his gaze is steady and intelligent, alive with reckoning. Another reason he is often ridiculed and snubbed is that he is illegitimate. In fact, he has no surname. No qualifying appellation links him to a great and noble family. Never could he go straight to heaven, and always must he assume responsibility for a state of life that was in no way of his own making. His father is an accountant and notary, a man who does other people's sums for them, witnesses documents, draws up bills of sale. He owns a small farm in the countryside, in the Alban Hills that cut across the marshy middle Arno valley. It is situated 12 km north of Empoli, the town that marks the half-way point between two old enemies, terrestrial Florence and maritime Pisa. The farm is a mean sort of affair, with simple, Spartan buildings (I have been there). Sir Peter, our man's father, takes a serving girl in the fields one hot day in July and in consequence she falls pregnant. Her name is Catherine Lippi (Caterina). Despite the name, she is of North African origin. Curious that her son should looks so Nordic–an accident of genetics.

The child is taken from her and brought up by its paternal grandfather in the nearby town. Catherine survives the loss and goes on to marry a local farmer. The boy spends his summers exploring the countryside around the farm. Not only is he able at drawing, he is can write equally well both forwards and backwards. The latter he finds comfortable, as he is left-handed. Writing in mirror image will not save him from being despised–and indeed detested–by those who feel keenly that he is more brilliant than they are. This will induce him to be careful to the point of practising elaborate secrecy. Unlike his contemporary, Alessandro Filipepi, nicknamed Botticelli, he was no follower of the violent, revolutionary monk Savonarola. Indeed, he may have heaved a sigh of relief when Girolamo Savonarola was carted into Piazza della Signoria, tied to the stake and incinerated. Bombastically, Savonarola had ridiculed his theories on painting and in the process corrupted Botticelli's technique. The punishment proved that one cannot be too careful if one wants to be a rebel. The defence of the social order is likely to be both vigorous and vicious.

So our man is a painter. In his entire lifetime there will be only 19 extant works, some of which will be painted largely by his assistants. Yet no paintings anywhere by anyone will ever be so highly prized. And the irony is that our man is a hopeless frescoist, quite unable to master the technique. But he has other ambitions. His chief objectives are to write a book to demonstrate that painting needs a scientific technique and to write another on the behaviour of water. He achieved neither aim, but he left 2,500 pages of notes and drawings. He became a scientist long before the concept of science was even devised.

In the modern age we see about 70,000 images a day (and the paper we use, whether it is tangible or 'virtual' is something upon which we place little value). In this manner we cannot possibly appreciate or understand the images. But think back to half a millennium ago, when people saw very few images, and they were highly prized and long remembered, when paper was a scarce, expensive commodity (it came from Fabriano in the Marches).

There is a place called Pisignano in Chianti, where I like to go for walks (I was there shortly before writing this). It extends northwards into the Arno valley along a ridge-top situated in the extreme northwest of the Classic Chianti (DOCG) wine-producing area. The landscape is typical of central Tuscany: an alternation of fields of silver-leaved olive trees and well-regimented vineyards, serried rows of pointy cypresses, occasional pear, peach, fig and walnut trees, four-square farmhouses with honey-coloured stucco, some campaniles and towers with battlements nestling in groves of trees. With the obvious concessions to modernity, it is much as our man would have found it. A sketch housed in the Uffizi Gallery confirms this.

In England, Queen Elizabeth the First conversed fluently with her tutors in Latin. Our man did not have the benefit of a formal education. He knew no Latin or Greek and hence could read no standard texts. It freed him from dogma and gave reign to his great attribute, the ability to think freely and laterally. We, especially in universities, receive much of our reality directly from others. Our man had to construct it for himself, very much the active, not the passive, form of learning. He did so with unparalleled ability. Germaine Greer told a modern audience that his work is hugely overrated. It is not and this throw-away comment diminished her. Thousands of scholars have spent their entire careers seeking to understand his ways of thinking. His mind is labyrinthine. It amply repays study and never does it reveal all its secrets.

The triumph of dogma is at once an ancient phenomenon and a perfectly contemporary one. Our man kept his thoughts to himself. He also moved house far more than was usual in his age. It preserved his life at a time when sudden raids, trials by fire, and opportunistic warfare were the rule, not the exception. But his thoughts–so original, so precious–remained unappreciated for 350 years. This is a remarkably important point in an age in which the 'pathways to impact' are expected to catapult you to your destination in an instant. This is the age of "impact as instant gratification". So his collections of notes, drawings, sketches, maps and diagrams were stuffed into out-of-the-way library shelves. One wonders how many priceless offerings were simply thrown away, burnt on the rubbish dump, unappreciated. But as Groucho Marx memorably said: "Why should I do anything for posterity? What's posterity done for me?"

We live in an age that seems determined to learn nothing at all from history. One thing we could do is to reverse the trend. Rather than courses on how to use technology, or how to get a well-paying job, perhaps we need instruction on how to look, listen and evaluate. Our man struggled to find the deeper meaning in things. He too grappled with technology, much of which he invented from scratch in extraordinary bursts of creativity. The timelessness of his achievement shows that life is about far more than a foreshortened pathway to impact.