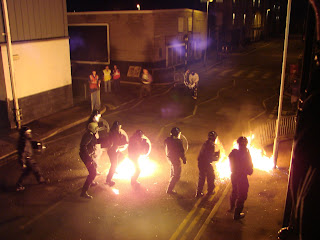 The current system for managing major incidents and disasters in the United Kingdom was devised after the Broadwater Farm, Tottenham, riots of 1986 and reflects a preoccupation with public order. The lineaments of the system reflect military practice.

In the world as a whole, there has been a gradual process of demilitarisation of emergency response. Moreover, where innovation flourishes it has been accompanied by a reduction in authoritarianism.

Meanwhile, in Britain, there were shortcomings in the response to the 1999 Ladbroke Grove train crash, particularly in the treatment of the survivors. The same shortcomings were present in the 2005 London bombings, as were others (for example, the way in which 'major incident' as declared). In 2017, the responses to the Manchester Arena bombings and the Grenfell Tower fire were substantially criticised. According to the Kerslake report, Greater Manchester Fire and Rescue Service was "brought to a point of paralysis" during the response to the Arena bombing. In Grenfell Tower, London Fire Brigade used the wrong tactic and were comprehensively criticised by HM Inspectorate.

In making these observations I do wish to acknowledge the superb dedication and professionalism of members of the emergency services. What is lacking is a proper system that would make the best of their skills.

JESIP, the Joint Emergency Services Interoperability Principles project has been widely described as worthy but ineffective. Training for major emergencies is insufficient and poorly managed.

We call flooding that stretches from Yorkshire to Somerset "a major incident". And by the way, according to the Environment Agency, one third of existing UK flood defences are liable to fail, while others are controversial or lacking. Coronavirus, which has killed 120,000 people, infected four million and brought the economy to its knees is also "a major incident". Let's lay it on the line: these are disasters.

In the case of coronavirus, the medical profession has taken control of the agenda, yet most of the failings--and there are many--refer to civil protection issues: communications, logistics, coordination. Most striking is the abyss between plans and the ability to implement them with emergency response measures. Let us remember that, where foresight should have been exercised, improvisation can all too easily be regarded as negligence.

In the United Kingdom, the status of emergency planning has declined while it has been enhanced in other countries. Absurdly, it is not treated as a profession and has no career progression or higher education requirements (I should add that the field has an intellectual history that stretches back 101 years).

The 2004 Civil Contingencies Act has been sidelined throughout the Coronavirus disaster. Now every country needs a basic law that broadly specifies the organisation and structure of the civil protection system, and how it works. Examples are the Stafford Act in the USA, the Disaster Management Act of India and Law 225 of 1992 in Italy. Failure to utilise the basic law is an indication that it is not fit for purpose. It is unconscionable that major emergencies be managed without a basic law and there are many reasons why the Coronavirus Act is not an acceptable substitute.

In the UK emergency planners do not manage the events they plan for. This is because the concept of 'command' eclipses that of 'coordination' (and also because of the low status of this field). A gulf has therefore developed between plans and the ability to activate them. The worst consequences of this have been experienced with Covid-19, quite possibly with the avoidable loss of tens of thousands of lives and tens of billions of pounds.

Modern emergency management is based on coordination and cooperation. It is more a question of apportioning tasks and resources than commanding people. Moreover, it is inclusive. There is some evidence to suggest that, on aggregate, women make better emergency managers than men do. Inclusiveness should extend to the needs of minorities, BAME, but also people with disabilities, who constitute one seventh of the population.

The challenge of the 21st century is to make civil protection an inclusive process. People must take more responsibility, collectively, for the risks they run. They must participate in safety and crisis response issues. The age of spontaneous voluntarism is over: that of organised voluntarism is in full swing. Civil society organisations should be a full, incorporated part of the system, as they are in Italy, Germany and Sweden.

I believe substantial changes are needed. We should accept that we have disasters in the UK. We should acknowledge that they require a proper, fully articulated structure and a system to manage them, backed by renewed national legislation. Let us replace doctrine by 'plans' and 'procedures'. Let us replace major incident by 'major emergency' and 'disaster'. Let us modernise the culture of civil protection.

Where emergency and disaster responses are overcentralised, they fail. In this respect, negative lessons can be learned from France, positive ones from Sicily, where the autonomy statutes gained by the region and its nine provinces were a major stimulus for the improvement of civil protection plans and practices. Creating a system that is solidly based on the local authority (and properly funded at that level), coordinated regionally and harmonised and supported nationally is now a vital British imperative.

With thanks to Mr Tony Moore for his observations and guidance.