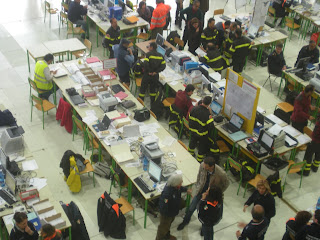 Although we need to change attitudes to disaster from response to preparedness and prevention, this must not be done at the expense of our ability to respond to disasters when they occur. In the light of climate change, technological risks and migration, we will soon need civil protection systems that are an order of magnitude more powerful than those that we have now. One of their principal functions will be to limit damage.

In prevention, there is almost always a positive relationship between investment and return. In other words, spending money on preparedness saves money on damage contained and casualties avoided. We have known this in some detail since the mid-1960s. However, the time-lag between expenditure and return is often fatal to prevention initiatives because it is longer than the typical political cycle. This is not the case with response, but both prevention and response encounter the problem that impacts may or may not happen in any defined period of time, or in any measurable decision-making cycle.

What makes the present day different is that, for many kinds of disaster, recurrence intervals have shortened drastically. They will continue to do so. Disaster is a daily occurrence, along with all the bereavement, suffering, misery, destruction and curtailment that it brings in its wake. Governments have not woken up to the fact that it is now a significantly more intense phenomenon than it was in previous decades. But you haven't seen anything yet: the disasters of the future will be far worse, unless, that is, there is a miraculous sense of enlightenment.

Typically, planning for disaster is a conservative process - if it exists at all (its value is consistently underrated and its functions are consistently misunderstood). Governments tend to plan for past disasters, not future ones. We do have the foresight to anticipate what comes next: what we lack is the leadership to do something about it.

I say to leaders, it is absolutely necessary that you be radical. We need a revolution, not the usual pitifully slow and feeble pace of evolution.
By and large, governments do not want to know about disaster risk reduction. They believe they can get by without it. Nor are they particularly interested in mounting efficient and effective responses to disaster. Neither is there much demand for them to do so, such is the level of ignorance and fatalism about disasters. It is simply naive to assume that if one gives governments scientific information they will act on it. Some governments might be more likely to imprison and torture one.

We live in an age in which reality means different things to different people. To some extent, objective scientific reality has been beaten into a corner. We have to learn to fight against the kind of dissidence that causes anomie to proliferate, the breakdown of values and standards. Society is grappling with powerful technological change. It does not fully understand the vulnerability of the technology (consider, for instance, the effects of long-term loss of electricity) nor what methods should be used to control it. 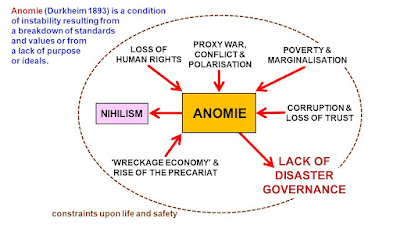 Disaster risk reduction cannot be based on a narrow view of the problem. All vulnerability is contextual (see my writings on that). Much disaster research is backward looking: that will no longer do. Have the courage to face the future - objectively. To know the problem well is half way to achieving the solution to it.