Interpreting the Pandemic for Decision Making and Action 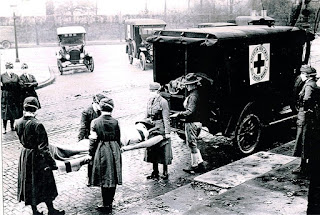 As the Covid-19 pandemic progresses, causing distributed crises in one country after another, it is like watching all I have taught about for the last four decades flash past in a sort of speeded-up film.

In disasters of this kind, three attitudes are common. Normalcy bias, the tendency to accept the most reassuring interpretation of a situation, tells people that it will not be as bad as it seems. The syndrome of personal invulnerability tells them that the worst can only happen to other people. This leads to cognitive dissonance, simultaneous belief in two incompatible ideas. All of these are misleading states of mind, perhaps dangerously so, and especially when found in politicians and decision makers. Other states of mind combine with the three syndromes to worsen the environment of reaction to the crisis.

For a century, the Hollywood model of disaster has been widely disseminated in disaster movies. The underlying precept of this is that beneath the civilised veneer of society pervasive anarchy lurks, which in cases of extreme disruption would bring out the "savage" in ordinary people, a tendency to safeguard their own interests by all conceivable means, including extreme violence. The Hollywood model relies on heroes and villains. In disaster movies the villains either have rapacious ulterior motives connected with power and greed, or they are immune to common sense. The hero (almost always a man, not a woman, who is invariably his loyal supporter) is a young, fit, active, misunderstood visionary, the only person who can see the truth and is prepared to fight for it. Against all odds, he wins. What nonsense! In reality, fighting disasters is a collective effort that places complete reliance of developing enough consensus for measures to work. It demands meticulous prior planning and the development of detailed scenarios before the phenomenon strikes. While anti-social behaviour does not disappear, especially where it is ingrained in society, there is often an upwelling of social participation, which the sociologists know as the therapeutic community.

For Covid-19 we had the scenarios. I have taught them at least once a year for more than a decade. My primary message was that a pandemic is as much a socio-economic and behavioural problem as a medical and epidemiological one. There was nothing visionary about my approach. It was based on material that has been well publicised and freely available since the second half of the first decade of the century. Normalcy bias, fiscal stringency and the ideology of profit conspired to stop preparations from being effective. Dire warnings were given by emergency planners and epidemiologists. There were ignored or underrated, largely because dire warnings tend to be discounted. They do not encourage decision makers to assume responsibility.

What is now fascinating about the consequences of this is that improvisation is being used frantically to cover the yawning gaps in preparedness. Improvisation cannot be totally avoided in disaster, but failure to prepare leads to avoidable deaths and suffering. Hospital beds, medical staff, personal protective equipment, ventilators, vaccines, antivirals, palliative medicines, economic subsidies, payment for holidays, substitute wages, organised assistance, the policing of social distancing, the reorganisation of public transport and basic services, emergency communication, they are all being improvised. It is rather too much and hence the task is simply overwhelming.

For many people, the Hollywood interpretation, familiar as it is, was the only model they had recourse to in order to understand the workings of this disaster. It rapidly proved unserviceable and has been abandoned by many, thank goodness. However, it has been followed by catastrophism. We might see this interpretation as one of the "orderly breakdown" of society, in contrast to the anarchic version propounded by Hollywood. Inasmuch as there is a model, it is the 1920s, a dire period that led, through mass unemployment, general strikes and failure to care for demobilised servicemen, to the Great Crash of 1929, and ultimately the Second World War. Perhaps the overriding question is "after Covid-19 has finally abated, to what extent will the world be the same as it was?" There is little sense that it will be a better, stronger, more prosperous place.

A related question concerns whether the lessons of this pandemic will be learned. The indications are, at best, mixed. There is often a tendency to assume, once a disaster has passed and recovery is well underway, that it is "all over", an episode that will not be repeated. One of the greatest lessons is the imperative need to take emergency planning and preparedness more seriously. I hope that this will be received in full, resources will be supplied and major effort will be expended, but I am not going to bet on it.

In previous posts, I have suggested that disasters need to be understood with more emphasis on their context. I suggested the "egg model", in which the yolk is a set of causal factors directly related to disasters and the white is all the factors that impinge on the yolk without being direct causes of disaster. In another model, general vulnerability encapsulates specific vulnerability to disasters. We will need to look long and hard at the context of future susceptibility to disasters and chart the interaction in a world that will inevitably bear the marks of this major upheaval. Until some form of stability is reached, progress on this important task is likely to be very restricted.