Covid-19: Elements of a Scenario 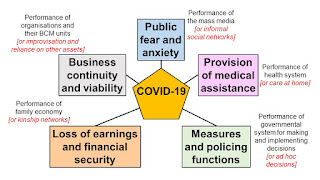 It is now more than ten years since there was a general push to induce countries to plan for pandemics (WHO 2005). In some quarters, it had an immediate effect (e.g., US Homeland Security Council 2005, UK Government 2008), while in others it did not. In 2020, some confusion arises from the fact that much of the planning refers to influenza, whereas the SARS category of diseases is not strictly a 'flu virus, but most of the planning principles are exactly the same, so this is mainly a labelling issue.

In the wake of the WHO report, Professor Ziad Abdeen of the Palestinian Health Authority said about pandemics: "My task is to tell you things you don't want to know, and ask you to spend money you haven't got on something you don't think will happen." About the same time, 2007, Dr Michael Leavitt of the US Department of Health and Human Services wrote: "We don't know when a pandemic will arrive. However, two things are certain: everything that we do before will seem alarmist; and everything that we do afterwards will seem insufficient." Nevertheless, Dr Margaret Chan, then the Director of the Communicable Diseases Section of the WHO, stated "For the first time in human history, we have the ability to prepare ourselves for a pandemic before it arrives. Therefore, the world community must take action immediately." That was at a time when an influenza pandemic with devastating consequences was greatly feared. When it came, in 2009, it was less deadly than expected, but that does not negate the possibility of a highly contagious disease with a case fatality rate equivalent to that of SARS in 2003, namely 10%.

Major epidemics and pandemics (what is the difference?) are crises which have to be managed simultaneously at several levels, from international to local. They also involve very high degrees of uncertainty. The mathematical models that are used to predict the diffusion of diseases tend to be parametric and to depend on simple but debatable assumptions (e.g. Mathews et al. 2007). If the progress of the disease is linear or simple non-linear, that is acceptable. However, aggregate human behaviour and many local factors, including prevention measures, can modify the prognosis.

I have no magic answers to the problem of the SARS-CoV-2 virus. One thing we know about pandemics is that the socio-economic effects, not only the medical ones, can be profound. Vast mutations in society, economy and social behaviour are possible. Although we hope that they will be temporary, they may well have some lasting effects. For example, civil aviation is particularly vulnerable. Based on SARS 2003 and early infection rates, a projection for the effect of Covid-19 on the airlines shows a dip for six to nine months (Pearce 2020). However, this depends on whether companies manage to remain solvent during and after the crisis. The civil aviation landscape could change drastically in the longer term.

The figure above is an attempt to summarise the issues connected with the Covid-19 pandemic. In each of the five categories there are opposites or alternatives. Thus, the vulnerability and fragility of people and society need to be seen in the light of socio-economic changes induced by the epidemic. Here is how I would classify the impacts and challenges. This is intended as the basis for possible scenarios of the outcome of the pandemic.

Severe negative impact:-
Under severe duress:-
Under duress:-
Presenting opportunities:-
Changing and needing to adapt:-
Intangible effects:-
These, then, are the possible building blocks of scenarios that could be used for future planning. It is important to ensure that emergency planning measures are balanced among society's and people's needs. This is where scenarios can help by providing the broad overview of demand for help. It is also important to remember that the Covid-19 pandemic occurs in the context of other developments. These include post-recession recovery, polarisation and wealth distribution issues, and the pressing need for climate change adaptation. In Britain, they also include the Brexit negotiations and the shape of the post-Brexit economy that will emerge after 2020.

A very important question to be answered is how a country functions amidst a general shut-down, something that is looking increasingly necessary in a number of places. This matter has to be examined from the point of view of citizens, workers, decision makers, crisis responders, and other stakeholders. Perhaps comparisons with the general strike of 1926 might yield some insights. However, it is important not to overdo historical comparisons, as we know from looking at the effects of the 1918 'Spanish' influenza (Spinney 2018).

Finally, another aspect to take into consideration is the politicisation of disease. The 'Spanish flu' was so called because Spain was liberal in its control of information, yet the virus came from China. Wherever a disease comes from, and whoever brings it, there is no justification for creating scapegoats. One has the impression that in 2020 the world needs to relearn the practice of solidarity between nations and between communities. This brings us back to context, and the potential role of identity politics, a corrosive role if ever there were such a thing.

WHO 2005. Global Influenza Preparedness Plan: The Role of WHO and Recommendations for National Measures Before and During Pandemics. Department of Communicable Disease Surveillance and Response, Global Influenza Programme, World Health Organisation, 49 pp.