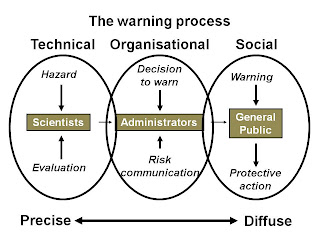 On Monday 6 April 2009 at 03.32 local time an earthquake of magnitude Mw=6.3 and hypocentral depth 8.8 km occurred with an epicentre a few kilometres southeast of the city of L'Aquila (population 73,000). Some 294 people were killed. Of the 1500 people wounded, at least 10 per cent were seriously injured. Damage has been reported in 49 municipalities and is serious in 16 of them (containing many small villages). About 28,000 people were rendered homeless and 18,000 of them were evacuated to a total of 106 tent encampments. This is the worst seismic disaster to have occurred in Italy for 29 years.

It would appear that this earthquake is typical of what happens periodically in the central Apennines. Although in recent history damaging earthquakes have been more common in the Region of Umbria, further north, L'Aquila is only 50 km by road from Avezzano, to the southeast, where 29,000 people (comprising almost one quarter of the local population and 97 per cent of that of the city) died in a violent earthquake on 13 January 1915. Moreover, an earthquake in 1984 left 11,000 people homeless in the vicinity of Sulmona, 50 km east of Avezzano.

The event of April 2009 took the form of an earthquake swarm, which is another common feature of central Apennine seismicity. Increasing foreshocks were followed by a main shock of moderate power (although very significant destructive potential) and a poorly attenuated series of aftershocks, some of which almost rivalled the main shock in size. Damage was therefore a result of both a single episode of strong motion and the cumulative effects of multiple shocks on severely weakened buildings.

Characteristically, damage appears to be concentrated in unreinforced masonry buildings of a historic nature and poorly constructed modern reinforced concrete buildings. No doubt state of maintenance and the presence of uneven repairs or mixed construction played a role, as is inevitably the case in such events. The most notorious damage appears to have occurred in major ecclesiastical and public buildings and a University of L'Aquila student dormitory.
At the world scale, the overwhelming majority of deaths in earthquakes occur at night, despite the fact that seismic events which cause casualties are evenly distributed among the phases of the day (Alexander 1996). In this case, perhaps the only scenario posing greater risk to life would have been an earthquake that occurred while churches were crowded with worshippers, as was the case in the 1980 Irpinia-Basilicata earthquake (magnitude 6.8, deaths approximately 3,000). In any event aggregate patterns of human behaviour play a large role in determining earthquake death tolls.

As major seismic events have not occurred in living memory in the L'Aquila area, it is unlikely that any of the inhabitants had personal protection plans or other ready resources. Hence there was no culture of individual self-defence against earthquakes, although the Abruzzo Region has a well-earned reputation for its civil protection organisation. Once again the role of self-protective behaviour in earthquakes remains difficult to estimate in terms of its life-saving potential. However, as with all nocturnal events, death tolls must be linked to some extent to the lack of ability to react quickly of people who are sleeping.

Initial mass-media coverage of the event followed a pattern that is thoroughly well known to students of disaster journalism. Human interest stories, coverage of VIP visits to the area, news of world reaction to the event, and efforts to convey the flavour of being at the scene of the action intermingled with updates on the statistics of casualties, homelessness and emergency responses. On a positive note, the stoicism and dignity of the survivors came over strongly in the news bulletins and was one factor that contributed to a relative lack of controversy in the reporting of the event.

Time and time again sociologists of disaster have shown that antisocial behaviour is minimised in the aftermath of disaster by the accession of the so-called 'therapeutic community' (Barton 1970). However, it is clear that looting and other spontaneous examples of bad behaviour are dear to the mass media, as they confirm the stylised popular view of disaster as the breakdown of society, as shown in countless Hollywood films. As a result, examples of anti-social behaviour tend to be seized upon and exaggerated. For example, in the 1997 Umbria-Marche earthquake swarm, the last significant seismic disaster that Italy had had to cope with, much was made of looting, but it appears that very few culprits were involved and the incidence of the phenomena was severely circumscribed. In the present case, members of the public purporting to represent the civil protection authorities sent false earthquake warnings by SMS. Others have been accused of price gouging. Much was made of this in the domestic news media, but it is highly likely that once again very few miscreants were involved-a statistically insignificant number of people. The response of the real authorities was firm and decisive.

A further aspect of press reporting shown during this disaster was the common tendency to exaggerate. Both the city of L'Aquila and the small village of Onna, 8 km to the SSE, were described as being 'destroyed'. Aerial views of the buildings of Onna show 100 per cent damage and 50-60 per cent outright collapse. Images of L'Aquila show sporadic damage, including the partial or total collapse of single large buildings and areas in which groups of buildings have battered each other down. In both cases this is far from total devastation. However, aggrandisement is a common feature of disaster reporting in any setting.

Highland Abruzzo is an area of relatively sparse population and the main area of damage appears to be limited to a 25 km radius around the epicentre. Hence, the civil protection response to the emergency posed no exceptional challenges other than the need to conduct rescues in precarious circumstances and to prepare for the eventuality of rainy weather. Five mixed operations centres (Centri Operativi Misti) were soon at work and relief columns were quickly mobilised by the regions of Italy. The ratio of assets to needs posed no unsolvable problems of the allocation of resources. Hence, the disaster represented only a moderate test of the Italian civil protection system, which has undergone very significant transformation and development in recent years, particularly towards decentralisation and the consolidation of organised volunteer forces. As in all seismic events, the L'Aquila earthquake confirmed the role of the National Fire Brigades Corps as the lead agency, owing to its primacy in technical rescue and making urban areas safe.

Despite the competency brought to the field by the relief forces, severe difficulties appear to have been experienced with the seismic inadequacy of buildings chosen to house the operations centres.

Both in Italy and abroad much attention was given to Dr Giampaolo Giuliani, a technician with connections to the Italian National Research Council, who discovered radon emissions anomalies in the days before the main shock and tried to institute an earthquake warning. Perhaps 10-20 per cent of the initial press coverage of the event was devoted to the ensuing controversy, as the civil protection authorities attempted to quash the warning and continued to state that it had not been justified.

Earthquake prediction can be divided into long-, medium- and short-term phases. In the long and medium terms, the seismicity of the central Apennines is well known, has been thoroughly investigated and has produced good estimates of the recurrence of significant earthquakes. The zone affected in April 2009 remains in the second category, that of moderate seismic risk. Classification is carried out at the level of single municipalities and is revised periodically. It is updated on the basis of data from seismic events, but these are not common enough to give a completely accurate picture. The upgrading of the area's status from one of moderate seismicity is overdue, but in any case many buildings antedate antiseismic norms and have not been retrofitted.

The short-term prediction of earthquakes has considerable allure for scientists, journalists and the public alike. However, it is beset by problems. The main ones can be summarised as follows:-

(a) There is an element of uniqueness in earthquake source mechanisms that tends to defy prediction.

(b) Earthquake source mechanisms are complex and involve many variables and factors.

(c) Radon is an inert element that is present in many rock formations. It may be released in increased quantities into groundwater as a result of the micro-fracturing that precedes an earthquake and generates it source. One might also expect variations in groundwater discharge, as evinced by fluctuating piezometric levels in wells or changes in the discharge of springs. However, world-wide experience with radon monitoring has proved inconclusive.

(d) Although at least eight physical phenomena are capable of showing definable 'signatures' in the hours before earthquakes, no single phenomenon has proved reliable enough to act as a routine predictor. The ratio of P- and S-wave velocities in background seismicity appears to be the most reliable of the phenomena, but even this is not capable of generating routine predictions. Hence, it is wise to consider all precursory phenomena together.

(e) Earthquake precursors are diagnostic of strain in the earth's crustal materials, but not necessarily of the sudden release of that strain.

(f) Even where earthquakes have successfully been forecast in the short term, for example at Haicheng in China in 1975, the prediction has proved difficult to replicate subsequently. In fact the Chinese failed to predict the 1976 Tangshan earthquake, which caused the largest toll of casualties of any in the 20th century.

(g) All scientific prediction of earthquakes is probabilistic and probabilities lead to dilemmas about how justified remedial action is. Moreover, most predictions have involved either low probabilities of long time-windows of validity, which makes an emergency response exceedingly difficult (Alexander 2007).

In 1985 the Garfagnana area of the Tuscan Apennines was the scene of a short-term earthquake prediction that was communicated to the population. No earthquake occurred during the days covered by the prediction, or in the subsequent years. However, the public reaction involved significant disruption to normal life, with associated costs and stresses. The exercise was not repeated during the subsequent 24 years.

The Giuliani prediction may or may not have been justified by the available data, but there is little point in issuing a forecast if the warning system is incomplete. Natural hazard warnings should consist of a scientific or technical, an administrative and a social component (see figure). If any of these is lacking or inadequate, the warning process is likely to fail, as it would have done in this case, for no adequate mechanism existed to induce a good preventative reaction on the part of the public of L'Aquila. Hence, as much as any improvement of science, earthquake warning in central Italy would require a cultural change towards personal, family and workplace preparedness and constant sensitivity to the issue, including during protracted periods of seismic quiescence. In short, people would have to have personal disaster preparedness plans. Currently, there are no signs that this will occur and no trends in that direction.