"You ain't seen nothing yet!" 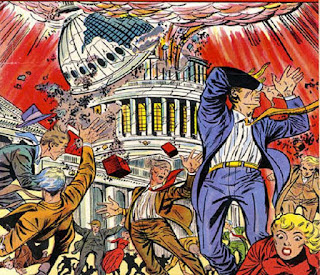 Brexit may indeed teach the British people what it feels like to be in a real, all-enveloping crisis, but it is not the greatest threat that we face in the UK. There are at least five other contingencies that could have a greater impact, and they are all linked to each other.

The first is a large volcanic eruption. In 2010, when the UK Risk Register was first published, there was no mention of such a thing, which is logical as Britain has no active volcanoes. Within weeks, ash emissions from the Icelandic volcano Eyjafjallajökull shut down civil aviation over 70% of the continent for almost a week. This was barely a foretaste of what could occur. In the 1820s, Eyjafjallajökull erupted for 13 months, including 25 days on full blast--and it is one of the smaller Icelandic volcanoes.

In April 2010, eight and a half million travellers were stranded by the cessation of flights. A bigger, more sustained eruption could lead to stop-start air transportation and prolonged airport closures for months on end. Besides the bankruptcy of low-cost airlines, there would be profound implications for ground and sea travel, hospitality, business, tourism and cultural activities, even for medicine, as the April 2010 crisis delayed the air-freighting of bone marrow for transplant.

Secondly, there is pandemic influenza. This tends to strike on a 30-40 year cycle. It is now a century since the so-called ‘Spanish ‘flu’ pandemic that emerged at the end of the First World War, infected 500 million people and killed 3-5 per cent of the world’s population. Subsequent pandemics have been disruptive, sometimes highly so, but not nearly as bad. This should not lull us into thinking that modern medicine has solved the problem: human beings have little or no natural immunity to pandemic ‘flu. A highly lethal strain could come in waves over a two-year period, and we would be 7-9 months into the crisis before vaccines became available to the public.

Thirdly, space weather is a phenomenon that could do considerable damage to the lifelines and networks on which we depend for normal life. A coronal mass ejection (CME, associated with sunspots) on the scale of that which occurred in 1859 could be deeply disruptive. This is known as the ‘Carrington event’ after the amateur astronomer Richard Carrington who observed and sketched the sunspots. Hours later, the CME played havoc with the telegraph, which was the only advanced means of communication at the time. Such were the geoelectrical currents that the CME generated that messages could be sent without switching the telegraph apparatus on, but the operators were liable to electric shocks from handling the equipment.

In 2012 a ‘Carrington event’ on the Sun sent waves of plasma into space and they narrowly missed the Earth. Knowledge of what such a phenomenon could do in the modern world is sketchy and a little speculative. Very large electricity transformers may burn out, telecommunications would be disrupted, satellites would be damaged and there would be interruptions and inaccuracies in global positioning systems, which are used in everything from driverless cars to air transportation, and even to manage rubbish collection. One would not want to be landing at Heathrow if there were a vertical error in GPS of more than 50 metres.

Space weather is monitored around the clock by the Met Office, which issues a daily forecast. Currently, it is one of the great underestimated hazards that could reveal our dependency on critical infrastructure. This is the set of networks that are essential to daily life. It includes energy, water sewerage, food distribution, healthcare, banking, government and emergency services. Besides space weather, if any other agent were to cause a widespread, prolonged loss of electricity supply, there would be  consequences for all the other forms of critical infrastructure, as to a greater or lesser extent they all driven by electricity.

Over the last decade, wide-area, prolonged power outages have occurred in various parts of the world at the rate of about one a year. The northeast USA was plunged into darkness in 2003 as a result of a grid failure, and again in October 2012 as a result of superstorm Sandy.

British infrastructure, commerce and industry endure millions of cyber attacks every month. In Ukraine, attackers brought down the electricity grid in December 2015 and severely disrupted banks, airports and railways in mid-2017. The UK power grid is well protected, but if it were to suffer a total shut-down it would take days to be restored. Meanwhile, there is considerable concern that many of the generators that would have to substitute for grid electricity are liable to breakdowns and malfunctions.

Finally, there is a very small possibility that a tsunami would be caused in the River Thames estuary by the spontaneous explosion of a large concentration of Second World War munitions that lies in a sunken ship off the Isle of Sheppey. Given the proximity to the Isle of Grain LNG and petroleum storage facilities, the tsunami might carry burning fuel.

Despite this gloomy story of doom and destruction, there are grounds for optimism. Research is underway into cascading disasters and how to prevent or mitigate them. These are events in which impacts occur in sequences or proliferations. For example, the sudden loss of electrical current would affect many activities and cause many secondary problems. They can be foreseen and prepared for. Where vulnerabilities overlap or interact, escalation points will occur, making the impacts potentially worse than the initial event that set them off. These too can be identified and mitigated in advance of the crisis.

Resilience needs a combination of foresight, adaptability and redundancy. Foresight involves building scenarios and investigating vulnerability. Adaptability requires new ways of getting around shortages, blockages and shocks. Redundancy may be about duplicating procedures and equipment but it is just as much about agile thinking that finds new routes out of a crisis.

Preparedness and crisis response need to be democratised, and that is the great challenge of modern times. We all need to take some responsibility for the risks we run. The only way to bring these under control is to treat the process as participatory exercise, with community groups flanking government and private sector planners. We need to shake off complacency and inform people so that they can make their own choices.

One final thing that we have learned about crisis is that it is heavily influenced by context. In Britain, the hollowing out of the welfare state bodes ill for the next major impact. A society that is weakened and has lost its cohesion is ill-equipped to confront crisis, which will tend, as it always does, to pick off the most vulnerable.