A Role in Response: The Place of Voluntarism in Emergency Organisation 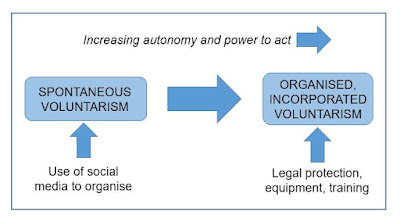 There are several reasons why voluntarism is important to emergency preparedness. First, in certain areas of activity, it can compensate for lack of official resources. Secondly, it can help connect the official response mechanism to the beneficiaries, namely the general public. Thirdly, it may give people more of a stake in how local risks are managed. Finally, it may help create a sense of community and encourage people to work for the common good.

Voluntarism can help to connect ordinary people to the system of official disaster risk reduction and emergency response. It can counteract the ‘top-down’ effect, with its potential blindness to local concerns and priorities. It can also help adapt emergency provisions to local needs. In this context, organised voluntarism can act as a link between salaried administrators and the general public, enabling the latter to connect with the emergency preparedness process and voice concerns to the authorities.

It is often suggested that voluntarism is in crisis in various parts of the world. The market-based ideologies of neoliberal capitalism have encouraged, promoted and prized individualism at the expense of selfless collective action. Harsh economic conditions and the rise of the ‘gig economy’ have created financial pressures that discourage people from volunteering, as this would be too great a sacrifice of time that could be spent earning a basic income. Public discourse has become harsher, and civil values have taken a beating. Nevertheless, charity, self-sacrifice and social participation have found new ways of expressing themselves, notably with the aid of social media. In one of her Christmas addresses to the UK nation, Queen Elizabeth II observed that, among the many people she has met during the course of her official duties, the happiest and most fulfilled have usually been those who sought a role helping others. Hence, voluntarism is certainly not dying and doubtless has a rich, varied future ahead of it.

This essay briefly examines (or really re-examines - see Alexander 2010) the nature of civil protection voluntarism. This largely means emergency response, although there is of course a role for volunteers in the wider processes of mitigating risks and preparing for future emergencies. In this work, the key question is how best to organise voluntarism so that it provides a valid and valuable service, motivates the volunteers and fits in with the ‘official’ system. As the legal, administrative and social support systems of countries vary widely, no one model is appropriate everywhere. There is a series of options to be considered, as the following section will show.

The nature of civil protection voluntarism

According to sociologists, agent-generated demands arise from the specific nature of the hazard or threat impact and response-generated demands stem from the process of organising and implementing the response (Quarantelli 1982, p. 3). Hence, the need for casualty management is agent-generated, but the need for stretchers and ambulances is response-generated. Volunteers respond to the former category of needs but generate the latter category.

The first question for civil protection authorities is whether it is better to avail themselves of spontaneous volunteers or create the conditions for organised, incorporated voluntarism. Although there are pros and cons on both sides of the dilemma, the world-wide trend is decisively away from spontaneous voluntarism in favour of the organised kind. This, however, may be a process or path, rather than a net distinction.

Spontaneous volunteer forces have been organised by enterprising citizens through use of social media to articulate people’s pressing concerns. Thus people with brooms and plastic sacks went out on the streets of London after the 2011 riots both to clean up the debris and to demonstrate that Londoners still have civic values of tolerance, solidarity and participation. In 2014, similar forces were out on the streets of Hamilton, Ontario, to clean up the debris left by the passage of an intense storm.

In Italy, organised voluntarism in civil protection stems from the founding of the Venerable Company of the Misericordia in Florence in 1244. In 2018 it is still in the same headquarters but has grown into a major ambulance and civil protection response service that is federated across the nation. Nevertheless, the dawn of the modern era of civil protection voluntarism in Italy stems from the arrival of many young people in Florence after the 4 November 1966 floods. Equipped with nothing but a backpack and bedding role, they dedicated themselves to the clean-up process with enthusiasm and earned the title of “mud angels”.

Spontaneous demonstrations of desire to help and participate are all very well, but they carry a number of drawbacks. Unorganised volunteers can be a drain on resources and are of limited use. Yet most civil protection voluntary organisations began in this manner. Thus, one could trace a  progression from spontaneous to fully organised and incorporated voluntarism (see figure). Hence, in Italy, 3,600 volunteer organisations are the backbone of the system. The organisations have government sponsorship and their members are protected with legal provisions. For example, they cannot be sacked from their regular jobs if they are called upon to respond to a disaster.

It is a valid hypothesis that voluntarism in civil protection cannot adequately be organised on an unprogrammed basis. Some of the reasons for this are as follows. First, members require personal protection in their response roles and insurance against accident, liability or losses. The complexity of events and increasing professionalism of roles requires systematic training. Volunteers work best in groups or organisations and these need to be accommodated by the system of official emergency response. In fact, given the need to orchestrate the response, it is important for such organisations to have defined roles that can fully be taken into account in emergency plans. Moreover, such roles must harmonise with other roles and tasks in such a way as to cover all anticipated needs generated by foreseeable emergency situations.

The process of building a system of volunteer organisations that is both parallel to the official response system and is harmonised with it involves a series of steps. Associations need to be formed and to acquire identity based on their tasks, roles and constituent members. Association involves working together; organisation involves grouping and readying for action. Training, the acquisition of equipment and operational bases, the formation of communications networks and the creation of procedures for recruitment are all part of the process of maturing and developing organisations. They may then enter on the path to incorporation, in which they gain official recognition and absorption into official structures, with an official role in emergency response or other civil protection activities.

Models of voluntarism in civil protection

When considering how voluntarism could be developed in civil protection, the first question to answer is what can volunteers do? Here is a list of possible roles:

In most countries there are probably already volunteer organisations that respond to with some of these needs.

In some countries emergency response voluntarism is well developed. In Germany, for example, Technisches Hilfswerk (THW) has almost 80,000 volunteers and 630 bases. It is well integrated into the official emergency response system. In Italy, there are 3,600 volunteer organisations with civil protection roles, some of which are federated into 36 national organisations. The volunteer rescue tradition stretches back 775 years and is fully accepted and well supported by local communities. It is usually a matter of local pride, as well as the prudence of having functional emergency services at close proximity. A corollary is the fact that Italian Law (specifically no. 225 of 1992) identifies the elected mayor of a municipality as the chief civil protection authority, which is a further connection between the official emergency response mechanism and the beneficiaries in the general population. Similar kinds of organisation exist in countries such as Colombia, but with lower levels of development, in part due to lack of resources and in part because of the persistence of conflict situations that have restricted the development of civilian agencies (Salamon and Sokolowski 2001).

In the United States individualism is such that volunteer activity is somewhat limited, although the American Red Cross is a fine example of how a regular institution can be integrated with volunteers. In the more seismically active parts of California there have been experiments with organising neighbourhood-level emergency response, by training and equipping groups of neighbours (Lichterman 2000). In southern Ireland, villages have organised to be resilient against emergencies using social media to communicate and identify indigenous skills.

The concept of ‘community’ is difficult to define and not necessarily therapeutic. In the first place, it has no inherent scale, It can be conceptualised as any grouping of people with a common agenda, or common fate, from the level of a single inhabited street to that of the entire world, as linked by information technology. Many local communities have expatriate elements, perhaps in the form of a diaspora. Secondly, the mere fact of a common destiny, or common interests, does not automatically make communities a force for social progress. Rather than being therapeutic phenomena, many communities are factional, divided by rivalries or subject to ‘elite capture’, a process in which the common agenda is subverted to the desires of the most influential or powerful members of the community (Lund and Saito-Jensen 2013). Although elite capture is mostly associated with communities in developing countries it is equally likely to occur in rich nations, albeit under a different, more subtle guise.

Despite these reservations, where they can be defined at a local scale, communities are usually rich in human capital (Becker 1994). People have skills and experience, as well as potential commitment. Organising volunteer groups is thus also a question of organising expertise in such a way that it can be exploited in emergency response or mitigation actions.

Another issue concerns how to use existing volunteer organisations, if there are such things, in order to extend their reach to emergency response activities. In the local community, there may be trained figures (such as flood wardens and snow wardens) as well as entire trained organisations. An ambitious scheme would operate at the national or regional level. It would provide a legal framework for operations, including coverage for anticipated risks, funding for equipment and training, and recognition and accommodation within the official system. Once established, the organisation could be incorporated into emergency plans with defined roles under expected emergency scenarios.

Civil protection is made up of the processes and organisations involved in preparing for and responding to civilian emergencies such as natural hazard impacts and industrial accidents. To be effective, it needs the recognition, and perhaps the participation, of the beneficiaries, namely the general public. In many situations, how to connect the public and the system is a major challenge. Encouraging and developing organised voluntarism is one possible way of taking up that challenge.

There is a choice of three possible strategies (which are not mutually exclusive):-

(a) Rely on spontaneous voluntarism and existing volunteer organisations. Seek to guide and direct them more effectively. This means anticipating developments that will occur which may involve volunteers and predicting both how they can be used and how they will act in a crisis.

(b) Make better use of existing voluntary organisations. Understand them, engage with them, seek to change and develop their roles in emergency situations. Seek a better institutional role for them.

(c) Start to develop serious civil protection organisations and a role, accreditation system and institutional framework for them. Templates and procedural and legal mechanisms will be needed.

By and large, the development of voluntarism is one of the possible measures of the maturity of the civil protection system and its path towards a service that is responsive to local needs and priorities, organised from above, but activated from below.