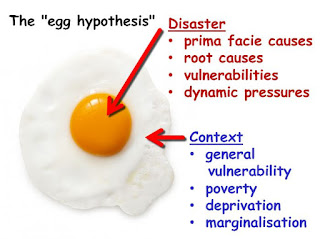 The desire to conceptualise disaster is strong. Hence, there are many models. Disasters  are large, chaotic, dynamic events in which there is bound to be unpredictability. They also tend to lay bare the inner workings of society. By virtue of their explanatory power, good models can act as a ‘road map’ of disaster. Things that appear to be chaotic are often a replication of what has happened in previous events. Models are relational, in the sense that they carry over past experience, codify it and apply it to new instances. By definition, a model is a simplification of reality in order to make it more comprehensible. To use a favourite old analogy from electronics, a good model filters out the ‘noise’ in order to emphasise the ‘signal’.

At the time of writing this, a debate is in progress among renowned experts in the field about whether the ‘disaster cycle’ is still a valid model: mitigation, preparation, emergency response, recovery and reconstruction. It has survived for 86 years (Carr 1932) because (a) disasters are repetitive, if not cyclical, (b) it is a simple and robust approach, (c) it has its uses in planning and teaching, and (d) it is not usually contradicted by the facts of a hazardous situation or place. Frustration with the model seems to come from the fact that it is not in any way developmental, other than having a sector of the wheel devoted to mitigation and risk reduction. The disaster cycle goes round and round and it does almost nothing to lift up the enterprise of dealing with crises, emergencies and calamities. Other common over-approximations of the cycle were dealt with years ago by Neal (1997).

One reason why models of disaster can be unsatisfying, especially in the modern age, is that many of them focus too exclusively on the phenomenon of disaster itself. To its credit, the‘pressure and release’ model (Wisner et al. 2004) does not do this, but considers “underlying risk drivers”. It is probably the most widely used theoretical conceptualisation of disaster.

I would like to introduce a very simple idea. I cannot really present it as being very novel or innovative - it is too simple for that. This is the ‘egg hypothesis’ (if, indeed, it is a hypothesis - you decide, gentle reader). We have moved into the age of resilience. Now this is also a simple concept, although it is one that, in the course of about 2,070 years has acquired many shades and overlays of meaning and interpretation (Alexander 2013). Resilience is variously a property, a goal, an aspiration and a political tool (Birkland 2016). Yet at its heart resilience is a simple matter of resistance and adaptation.

Different disciplines see resilience in different ways. For example, it has a long history in child psychology (Luthar 2006), also in materials testing and network analysis. One consequence of the multi-faceted nature of the concept is that disaster resilience may be ‘short-circuited’ by lack of resilience in other respects. The egg hypothesis stems from the very simple observation that it may be a waste of time to create resilience against specific forms of disaster if people are not resilient in other respects. For example, in the United Kingdom, efforts have been made for a long time to bring the floods problem under control (Wheater 2006). At the same time, the welfare state has been partially but systematically dismantled in the name of ‘austerity’ (Taylor-Gooby et al. 2017).

Given the almost obsessive interest of scholars in the shades of meaning of terms such as ‘vulnerability’ and ‘resilience’, it is extraordinary how little attention is given to ‘welfare’.

I would define ‘welfare’ as follows: “the provision of care to a minimum acceptable standard to people who are unable adequately to look after themselves.” I do so here because it is strangely difficult to find a straightforward definition of the term in the literature, or at least that branch of the literature that refers to disasters. My definition is dreadfully easy to criticise, and no doubt full of loopholes, but to strengthen it what we need to do is to look at what welfare is not, not merely what it is.

And so to the egg. The yolk is disaster risk reduction (DRR), and the white is general risk reduction, or alternatively disaster resilience and general resilience. The point is that it is difficult to create resilience against disasters for people, communities and societies that are not resilient against other threats, hazards and misfortunes, including exploitation. subservience, marginalisation and induced impoverishment. If the context of DRR is marginalisation, community dystopia and impoverishment, then disaster mitigation is unlikely to work.

If this idea is worth taking forward, it needs to be developed in terms of how things change dynamically. It has been suggested to me that the egg needs to be scrambled, so that DRR is fully integrated with a general endeavour to improve people’s living conditions, especially in terms of security and livelihoods. And where is the eggshell? Is that resilience? I would rather draw back from eggy metaphors and leave the comestibles fried without breaking the yolk, as in the diagrams.

The other important factor in the egg hypothesis is that the context influences the process of seeking resilience against disasters. The yolk is the yolk because the white is around it. One thing that cannot be overemphasised is that we need to look more closely at how contextual factors affect vulnerability to disaster, even factors that are not obviously connected with disaster risk. Now that is something to get eggcited about. 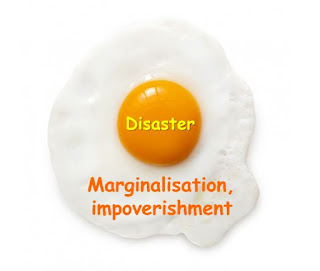 Taylor-Gooby, P., B. Leruth and H. Chung 2017. Where next for the UK welfare state? In P, Taylor-Gooby, B, Leruth and H, Chung (eds) After Austerity: Welfare State Transformation in Europe After the Great Recession. Oxford University Press, Oxford: 48-66.