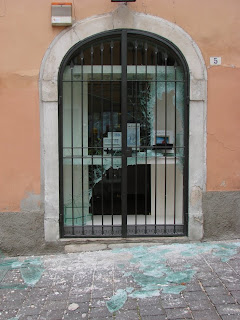 Looting, the very public theft of private property, is probably the most contentious of the so-called 'myths' of disaster. It has been misidentified or greatly exaggerated in many emergency situations. Moreover, it is often hypothesised as part of scenarios in which, in reality, it is unlikely to be a significant factor. It is usually treated as symptomatic of anarchy, the destructive side of the human character and the degradation or spontaneous abandonment of social norms. But while looting is refreshingly absent from many disasters, or at least is scarcely important in comparison with positive behaviour, it remains a factor in some events and, after years of study, it still demands clarification.

In 1968 sociologists Henry Quarantelli and Russell Dynes recognised that there is a difference between the causes and patterns of looting in disasters and civil disturbances (Dynes and Quarantelli 1968). Over the following two years they elaborated models of looting with particular reference to situations in which it has been prevalent, most of which were riots and few of which were natural disasters (Quarantelli and Dynes 1968, 1970). Indeed, with regard to the latter, there probably have to be specific preconditions of instability in the social fabric for looting to be a factor at all. Thus, after the Armenia (Colombia) earthquake of 1999, residents looted food stores and supermarkets. This was both a protest at the inefficiency of the Colombian Government's relief effort and a move to satisfy a basic need for sustenance (Brancati 2007). It was not a set of random acts of vandalism. Moreover, it probably stemmed from pre-existing instabilities in society, such as lack of faith in the role of government as the true and responsive embodiment of the common will.

According to Quarantelli and Dynes (1968), looting in disasters tends to be stealthy (although it clearly was nothing of the kind in the Colombian city of Armenia). In civil disturbances it follows a more open and complex model. In this, the first stage is marked by attacks on symbols of authority and there then follows the mass redefinition of property rights. The looting that occurs after this is a collective, participatory action in which pillaging tends to be more important than acquisition of goods: property norms have been redefined.

Dynes and Quarantelli (1968) broadened their model into three stages, in which the first is largely symbolic, the second is systematic and organised and the third is a free-for-all. The middle stage involves co-operation between those elements of society who wish to profit from the anarchy by organising theft and those who are doing it for the thrill. In the third stage, plundering becomes an acceptable, if transient, social norm.

Interestingly, Quarantelli and Dynes found that there is no simple correlation between the level of poverty or disadvantage of a person is and his or her propensity to engage in looting. Research in the 1990s (Wortley 1998) even went so far as to suggest that looters tend to be relatively well educated and adept at communication. Moreover, other work (Grabosky 1996) found that there appears to be no discernable difference in the average profiles of people who do and do not take part in rioting and looting.

Research conducted in the 1990s by sociologists and criminologists came up with new models. Bohstedt (1994) disaggregated the context of riots into the physical situation, the tactical conditions, any pre-history of similar incidents, prevailing social relationships, the local culture of norms and expectations, the political context of previous conflict, and the structural distribution of political power.

As long ago as 1969, Zimbardo had proposed a theory of deindividuation, in which individual responsibility for one's actions disappears amid impulsive mass behaviour that is dominated by crowd dynamics. Self-control disappears with it. In his contribution, Forsyth (1990) added that arousal is an important condition for the emergence of deindividuation. Turner and Killian (1972) developed emergent norm theory, in which crowds adapt to changing circumstances and their members conform to the developing trend of mass behaviour. Deindividuation is characterised by uninhibited behaviour, but strategic interaction theory suggests that a person's payoffs depend on what other people do at the scene, which can change a person's estimate of the costs and benefits of participating (Miller 1999). Bohstedt (1994) considered imitative riots and saw them as a communication process which he termed 'chronic contagion'.

In all of this research there are several points to bear in mind. The first is that natural disasters and civil disturbances such as riots tend not to generate the same kinds and scales of looting--indeed, the former might not generate any at all, and what occurs tends to be overshadowed by, or even (paradoxically) linked to, Barton's (1970) 'therapeutic community'. The second is that theories of rioting and looting can be divided into those based on association and communication, and those that require dissociation of the participants and a greater level of spontaneity. The third point is that looting can be purposeful or aimless. In disasters and riots that are a response to specific grievances, the purposeful kind dominates: i.e., looters want to make a point to the authorities. Aimless looting bears out Bohstedt's (1994) observation that the circumstances and dynamics of riots are not linearly related. In synthesis, the likelihood, occurrence and severity of riots cannot, it seems, be predicted from levels of social deprivation (Forsyth 1990). Hence, it is not easy to apply sociological analysis to situations dominated by social tension.

Rioting and looting occurred widely throughout England in early August 2011. The official response was seen by the general (non-rioting) public to be inadequate and to have let a bad situation degenerate into the uncontrolled proliferation of violence and anarchy. Suddenly the underclass had shed their mantle of invisibility and were up in arms. In terms of emergency management, there may have been a failure to create adequate planning scenarios based on similar events in the past and in other places, notably in Paris in October and November 2005. Similar inadequacies can be seen in the response to the bombing and shooting spree carried out in Norway on 22 July 2011 by Anders Behring Breivik.

It is important not to overstate the effects of the English case. In the Detroit race riots of 1967, some 2,700 shops were looted (Quarantelli and Dynes 1968), far more than in England in 2011. However, the images and accounts of immoral and criminal behaviour in the latter case were striking. Moreover, the dilemmas of crowd control were all too apparent in the operational shortcomings of the forces of order. Nonetheless, much ill-informed comment appeared, especially in foreign news media which did not take the trouble to read detailed accounts of the riots and thus tended to attribute them to deteriorated race relations. In reality they are a clear artefact of unfettered robber capitalism in which any form of social contract has been replaced with commercial profiteering that does much to increase the gap in wealth and opportunities from successful people and those at the bottom of the social pyramid. Small wonder that the latter rebel.

My last point is my most important one. What can be learned for disaster studies from the English looting spree is clearly rather limited, as circumstances obviously differ. However, the social study of disaster has been predicated for decades on the assumption, indeed the affirmation, of the therapeutic community--at least as it exists in the heat of the moment. Models based on the breakdown of society have been labelled as "Hollywood myths" (Mitchell et al. 2000). Whereas the English social fabric is emphatically not going to break down as a result of the August 2011 riots, it is as well to remember that society has its darker side. The moral consensus generated by floods and earthquakes, for example, is not necessarily as deep as social scientists have tended to assume. The answer for students of disaster is to pay more attention to the context of events.