The "prison of experience" - the Italian case 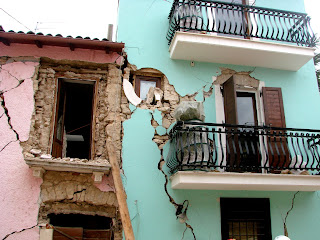 Over the last decade, two very influential books in Italy have been La Casta ("The Caste") by Sergio Rizza and Gian Antonio Stella (2007) and Gomorra: viaggio nell'impero economico e nel sogno di dominio della camorra ("Gomorrah: Journey into the Economic Empire and Dreams of Domination of the Camorra") by Roberto Saviano (2006). La Casta describes, on a detailed and individual level, the privileges and power of the political class. It is a handbook on corruption. Gomorra details the connection between the political class and the most economically successful of the four mafias in Italy. The response of the population to this is to feel trapped in a situation in which there are no democratic alternatives. The system was put in place in 1947 by the Americans and rigidly reinforced during the Cold War. The effect of this has been to fossilise, or perhaps indurate, it so that it even survived the collapse of Christian Democracy and the so-called "First Republic", which was induced by the end of the Cold War and bipartisan polarisation.

This explains the very substantial rise of the Five Star movement, a political party based on protest against the system. Unfortunately, Five Star does not have disaster prevention in its agenda.

With regard to disasters Catholicism has a positive side vested in its emphasis on charity and service. Its negative side is that it tends to induce fatalism. If one is Hyblean, female and of a certain age, the Virgin Mary holds the key to understanding earthquakes: if one is Sabine, it may be St Tammaro - and so on. Prayer and supplication are cathartic but do not add up to disaster risk reduction.

Another factor is a severely practical one: the constraints of multiple ownership of property. The historical tendency for people and families in the Mediterranean to live in very close proximity stems from the Roman (or possibly Iron Age) oppida, a defensible site on high ground. With modern demand for space, the population density of historical settlements in Italy is 10-40 per cent of what it was a century ago before mass emigration took hold. The modern equivalent is the reinforced concrete apartment block. In any case, living cheek by jowl is still the norm. Yet in a condominium it is routine to encounter opposition to spending money on structural reinforcement. For example, my second home is in a building 700 years old, located in a highly seismic area, and that has five owners. Four of us had to threaten one of the owners with prosecution in order to obtain payment for essential repairs to the roof. Seismic retrofitting is out of the question unless those who want it are prepared to pay on behalf of those who could not care less.

Added to this is the effect of the performance of dense urban fabrics in earthquakes and other sudden-impact disasters. Collapse at the top of the hill brings down 'innocent' buildings down the slope in a sort of landslide of rubble. This is a particular problem in historical hill villages. Even if buildings are not damaged, they may be inaccessible as a result of being surrounded by damaged and precarious masonry. This was the case for many residents of the centre of L'Aquila city after the 2009 earthquake.

The net effect of these considerations may amount to what Kates (1971) referred to as the "prison of experience", which induces a sense of impotency rather than empowerment. This is triangulated by three points: (a) the difficulty of obtaining any positive change from the political class, and the concomitant effect of organised crime on corruption, which maintains the 'alternative' economy in a dominant position over the official one; (b) a feeling that forces beyond one's control govern the likelihood of experiencing damage or injury in disasters; and (c) stonewalling, opposition to safety measures and lack of hazard perception by one's neighbours. These are some of the root causes of continued seismic vulnerability. They enable moderate earthquakes to cause major damage.