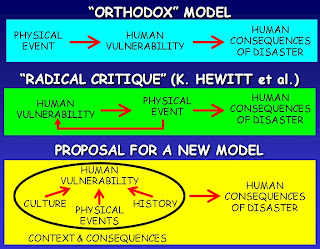 The more I participate in events and initiatives, the more I look at current trends in disaster risk reduction (DRR), the more I am put off by the lack of forward-looking attitudes. I see two dominant problems.

First, as I write, it is 2013, the thirtieth anniversary of the publication of the "radical critique" by Kenneth Hewitt et al. (Hewitt 1983). In a nutshell, this showed, convincingly and with examples derived from four years of contemporary research, that vulnerability is the real driver of disaster risk, and hazard is often merely the trigger. The primacy of vulnerability is ensured by feedback loops. Rather than returning to the preceding model, we should be seeking to develop Hewitt's thesis into something yet more attuned to the problems of the world thirty years later.

In the thirty years that have elapsed since then, we have seen modest growth in studies of vulnerability and exposure and massive growth in hazards studies, thus ensuring the primacy of the pre-1983 view of disaster. The very reason for the publication of Hewitt's critique was to show that an approach based on hazards does not produce disaster risk reduction to any satisfactory degree.

Secondly, I notice an increasing discrepancy between the tone of the meetings about DRR that I attend and what I read in my newspaper. This amounts to a failure to face up to the reality of the modern world. Of course, there are encouraging signs of progress, worthwhile initiatives and good practices. However, there are also bad signs. For example, little has been done to restrict the gradual migration of wealth from the poor and needy to the rich and powerful. To cite a specific example of the 'dark side', a news report (Guardian, 14 February 2013) noted that billionaires are lavishly funding the work of those who seek to undermine the consensus on climate change and its causes. Hence, not all billionaires are philanthropists in the mould of Carnegie, Rockefeller or Gates.

In the second decade of the 21st century, the prospects for disaster risk reduction are heavily influenced by hegemony, undemocratic influence, organised crime, proxy conflicts, resource wars, corruption, rigged economic prospects and denial of human rights (Alexander and Davis 2013). Most of the debates rely on the 'fiction of good intentions'. We aim to provide decision-makers, public administrators and captains of industry with the tools that they need to understand and manage risk and disaster. But will they use them. Indeed, do they care? Or alternatively what do they care about?

The term 'governance' should interpreted to mean a form of transparent, flexible, fair, morally defensible, democratic participation in decision making. It is increasingly regarded as a prerequisite of DRR and a determinant of the level of resilience (Djalanti et al. 2011). What is clear, and so often ignored, is that merely presenting the case for governance does not make in spring into being. In the same way, merely offering the tools to abate hazards does not mean that vulnerability will dwindle away and disaster risk will abate. The only solution is to see the world as it really is—warts and all—and militantly insist on progress.

Instead, one could be forgiven for believing that we live in an age of the 'dialogue of the deaf'—the age of heedlessness.

The Bouncy Castle of North London and the Origins of Resilience

To state that the term 'resilience' was invented in a bouncy castle in North London is about as accurate as writing that Richard III died after being knifed in the buttocks in a car park in Leicester. However, there is more to the story than mere embroidery of the facts.

Canonbury Tower was constructed in the early 16th century on the site of Roman remains. The builder was William Bolton, Prior of St Bartholomew, the forerunner of the eponymous hospital. In 1537, when Henry VIII dissolved the monasteries, the tower passed to Thomas Cromwell, First Earl of Essex (1485-1540). As State property, for the period 1616-26 it became the residence of Sir Francis Bacon, Lord Chancellor of England (Glinert 2012, p. 359). Bacon is credited with devising the modern scientific method, or at least the inductive version of it. He was also responsible for the first known use of the term 'resilience'.

Many students of the robustness of things, systems and people believe that 'resilience' was coined by C.S. Holling in his landmark 1967 paper on systems ecology (Holling, 1967). For example, Berkes (2007, p. 286) wrote, "Originally developed as an ecological concept, resilience is being applied to coupled human-environment systems." Goldstein and Brooks (2006, p. 3) were a little more generous with time when they stated that "The study of resilience traces its roots back a scant 50 years." In reality, the word has a very much longer history (OED 2013). It stems from resilire, resilio, Latin for 'bounce'—hence the idea of 'bouncing back'.

The etymology of resilire is unknown, which indicates that it was probably a part of standard Latin—as much as any such thing existed—in Classical times. The term appears in the writings of Seneca, Pliny the Younger, Ovid and Livy. Much later, it passed into Middle French (resiler) and then across the Channel into English as the verb resile, a word that appears in the State Papers of King Henry VIII in 1529 and evidently relates to his troubles with his first queen, Catherine of Aragon (1485-1536). Here, it was used in the sense of 'retract', or 'return to a former position'.

In the late sixteenth century, the term seemed to have enjoyed greater use by the Scottish intelligentsia than by its English counterpart, and it was intimately interwoven into the Scots dialect. Although resile faded from use in the 1700s, since then it has been periodically revived in writings by those authors who like to employ anachronisms.

Bacon was unusual for his time in that he wrote in both Latin and in English, the latter for a greater divulgation of his work. Hence, there was bound to be some transfer of terminology between the two languages. In 1625 he published a compendium of writings on natural history, the Sylva Sylvarum. In this, during a musing on the strength of echoes, he used the term resilience (Bacon 1625, p. 245—see figure, above).

The first known dictionary definition of resilience comes from the Glossographia compiled by the lawyer and antiquarian Thomas Blount (1618-79). It is interesting that Blount chose the word resilience to be among the 11,000 that he felt were far enough from common parlance to merit defining. He attributed it a dual meaning: to rebound and to go back on one's word (as in resilement, an obsolete derivative). Blount's lexicon went through several editions and was imitated by eighteenth century authors (whose works also included the term resilience), but the Glossographia faded into obscurity with the publication of more authoritative compendia.

It is interesting to note that the appearance of the word 'resiliency' post-dates 'resilience' by several years. Apparently, the former was first employed in 1651 in the English translation of Lumen divinum reformatae synopsis ("Natural Philosophy Reformed by Divine Light"), which was written by the Moravian theologian John Amos Comenius (1592-1670). This work was originally published (in Latin) in Leipzig in 1633 as part of Comenius's Didactica magna omnibus. At the time, Comenius was busy making Swedish schools resilient.

In the first half of the nineteenth century, resilience was still used in the sense of rebounding. Samuel Taylor Coleridge employed it thus in Hymn to Earth in Friendship's Offering, a rather mediocre poetic offering dated 1834:-

Inly thou strovest to flee, and didst seek thyself at thy center!
Mightier far was the joy of thy sudden resilience: and forthwith
Myriad myriads of lives teemed forth from the mighty embracement.
Thousand-fold tribes of dwellers, impelled by thousand-fold instincts, [...]

At this time the two nouns, and the verb, were used in various ways to denote rebounding, elasticity and fickleness. The last of these is, of course, a negative connotation, and one that was employed from Samuel Johnson in 1751 to Henry Best in 1826). Portentiously, from 1839 the term was also used to signify the ability to recover from adversity.

The first serious use of the term resilience in mechanics occurred around 1858, when the eminent Scottish engineer William J.M. Rankine (1820-72) employed it to describe the strength and ductility of steel beams. In an applied context, it was used in 1867 to describe the robustness of the cladding of the prototype iron ships. Herein lies the origin of the modern use of the term in civil protection. A resilient steel beam survives the application of a force by resisting it with strength (rigidity) and absorbing it with deformation (ductility). By analogy, the strength of a human society under stress is its ability to devise means of resisting disaster and maintaining its integrity (coherence), while the ductility lies in its ability to adapt to circumstances produced by the calamity (Alexander 2012).

Resilience and resiliency are synonyms. They have been widely applied in mechanics, particularly to the resistance properties of steel, yarn and woven fabrics (Hoffmann 1948). The adoption of the concept by Holling was specifically related to a systems theory approach to analysis of the stability of ecological assemblages (Von Bertalanffy 1950). This derivation does not work well when it is transposed to situations in which the general systems characteristics are less formally defined.

In the 1950s, the term resilience started to be used in psychology and it finally became popular in this field in the late 1980s (Flach 1988). It has been used particularly in relation to the psychiatric problems of children (Goldstein and Brooks 2006).

Independently of developments in psychology,  at the end of the 1990s resilience made the transition from natural ecology to human ecology (i.e. social sciences) thanks to the work of economists (e.g. Batabyal 1998) and geographers (e.g. Adger 2000). One legacy of ecology is an enduring emphasis on system stability as a hallmark of resilience. Perhaps questioning that ought to be a goal of future theoretical work.

Lastly, if 'resilience' was indeed first coined in Bacon's study in Canonbury Tower, there could not have been a more appropriate place for that to happen. Apparently, Bolton had the tower built because he was much troubled by the predictions of astrologers that there would be a return of the Universal Deluge. Hence, he had it stocked with two month's supply of food—very resilient!

Alexander, D.E. 2012. Resilience against earthquakes: some practical suggestions for planners and managers.  Journal of Seismology and Earthquake Engineering 13(2): 109-115.

Blount, T. 1656. Glossographia; or, a dictionary interpreting the hard words of whatsoever language, now used in our refined English tongue. The Newcomb, London.