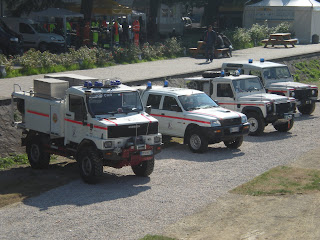 Italy has developed a national system of disaster preparedness which integrates all levels of government through a cascading system of emergency command. It has responded to the need for devolved control of resources and has developed the professional figure of the Disaster Manager.

On average in Italy 240 people are killed and 75,000 affected by natural disaster each year. Though the figures are small by Asian or Latin American standards, Italy bears the greatest risk of disaster in Europe. A major earthquake in the Strait of Messina would affect more than a million people, while if Vesuvius were to erupt as it did in 1631 or AD 79 between 650,000 and 3.1 million people would be directly at risk. Italy has therefore put considerable effort into developing a national system of emergency planning and management.

In many ways, the history of civil protection in Italy is far longer than that of the rather young nation state itself. Considering only the last hundred years, three broad periods can be defined, respectively as follows: from 1905 to 1920 the reign of the liberal state, in which people were largely obliged to fend for themselves; from 1920 until 1990 the social state, in which government assumed responsibility for protecting and indemnifying the population against disaster; and after 1990 the neoliberal state, in which the government facilitates self-reliance among the general population and offers extra protection to particularly vulnerable groups of people.

As in many other countries, so in Italy the evolution of emergency management has responded to specific disasters that have opened the "window of opportunity" for legislative change. The pace was forced by earthquakes in 1968 in Sicily, 1976 in Friuli Venezia-Giulia and 1980 in Campania-Basilicata. The first reaction to these events was to appoint a representative of central government as Commissar for post-disaster relief. The Christian Democrat Hon. Giuseppe Zamberletti was the principal incumbent and his energetic and immensely capable approach earned him the reputation of the "father of Italian civil protection".

In 1982 there began a decade of debate on the revision of the basic national civil protection law, which had been passed in 1970 following the Belice Valley earthquakes of 1968 in western Sicily. This designated the Italian Fire Service as lead agency. In this context it should be noted that, whereas in Britain emergencies are often seen as public order problems which require the police to be lead agency, in Italy they are regarded mainly as technical rescue problems--hence the dominant role of the Fire Services.

Fear of the abuse of draconian powers began to abate after the end of the Cold War and hence sufficient parliamentary--and presidential--consensus developed to pass a new basic law, no. 225 of 1992, which was the first legal instrument in the country to institute a national civil protection service.

What sort of government department?

The inadequacies of emergency management based on an ad hoc Commissariat were soon recognised. The approach was purely reactive and it did next to nothing for disaster mitigation, nor did it result in adequate ability to prepare for the next major emergency. Hence in the mid-1980s Italy began to experiment with a Ministry of Civil Protection, headed by a Minister without portfolio whose funding came from the Ministry of the Interior.

Disaster management is as interdisciplinary in terms of public administration as it is in an academic sense. Thus defects were quickly found in a system in which the Minister of the Interior (i.e. the Home Office Minister) pulled the strings. Moreover, national emergencies require not only the full participation of other ministries--Public Works, for example--but also a firm hand from the Prime Minister. Hence, Italy converted the Ministry of Civil Protection to a national Department which receives instructions from the Council of Ministers (i.e. the national Cabinet). One slight irregularity remains, in that the Undersecretary who heads the Department receives authority by delegation from the Minister of the Interior and the Prime Minister. In practice this has not inhibited the process of managing emergencies. By non-binding directive of the European Union this system has become the continental standard.

Each of the 109 provinces in Italy has a government office, or prefecture, and a provincial Prefect, who is the chief representative of central government at the devolved level. Prefects have responsibility for police and fire services and hence were identified in the 1992 law as the co-ordinators of emergency response at the intermediate level.

Seven years later, in 1999, two paragraphs of the so-called 'Bassanini Law' took this power from the prefects and conferred it on the regional and provincial administrations. Bassanini was responding to a national desire for more devolved government which the prefects, as agents of the Ministry of the Interior, were not equipped to provide. The Region of Lombardy, for example, is 15 per cent larger than Wales and has more than twice the population of Ireland. Its 12 provinces co-ordinate no fewer than 1546 local authorities and the range of civil protection problems encountered is impressive, as the region encompasses both Italy's industrial heartland and a section of the Alps.

In operational terms disasters must be tackled primarily at the local level. In Italy this means the 8104 municipalities, or comuni, whose mayors are identified by Law no. 225/1992 as the chief local authority for civil protection. Most of them delegate the practical aspects of this work to trained employees of the municipal technical office, but they are not allowed to delegate final responsibility.

Emergency preparedness and management is accomplished in Italy using the 'Augustus System', which is described in another article in this publication. Augustus is designed to provide a fully compatible means of preparing and planning for emergencies, deploying resources and communicating during them, and recovering from them. It operates at all levels of government from that of the humblest comune (Romagnano al Monte in Campania, for instance, has only 80 inhabitants) to that of million-plus cities such as Rome, Naples and Milan and, of course, the national government.

At the highest level, the response to national emergencies is co-ordinated from the Department of Civil Protection's headquarters in Via Ulpiano, Rome, next to the Law Courts on the banks of the River Tiber, and from the national emergency operations centre (EOC) on the Via Salaria.
According to the provisions made in the 1992 law, at the intermediate level of government Rescue Co-ordination Centres (known by the acronym CCS) were to be set up in prefectures when and where needed. Devolution has displaced this function to regional and provincial government offices. The provinces have the most direct role in co-ordinating assistance to municipalities, while the regions manage general support, as well as preparing hazard management plans for broad areas of land.

At the local level the larger municipalities house Mixed Operations Centres (COM), which co-ordinate the work of the Municipal Operations Centres (COC) which all of the smaller local authorities must have and which are often located in town halls. The level of provision for emergencies varies with the magnitude of local risks, with local experience of disasters and with the willingness to invest in response capability. The Comune of Florence, for example, has a dedicated emergency management centre with a brand new two-storey operations centre that is fully wired for information technology. When managing emergencies it also makes use of a very detailed geographic information system.

Italy is one country that makes very wide use of volunteer forces in disaster management. In Florence, for example the Venerable Archiconfraternity of the Misericordia has a 761-year-old tradition of not-for-profit work in emergencies. Thus, although the Comune of Florence has only 12 civil protection employees, it can put 5000 volunteers to work in the field within two hours of the start of an emergency and can activate 1000 of them within ten minutes. Likewise, Lombardy has 16,000 emergency response volunteers.

Volunteers in Italy must be organised into trained, equipped forces that require legal accreditation before they can collaborate in emergency management work.

Training and the Italian Disaster Manager

In Italy 24 universities and numerous other organisations offer courses on disaster management. Indeed, it is such a huge growth area that Lombardy has approved a Regional Standard for civil protection training. In the 1990s training was considered a national matter administered by the Department of Civil Protection from its multi-function campus situated in the Roman countryside. However, the demand is now so great that the process has been devolved to the regions and provinces. One legacy of the earlier approach is that the figure of 'Disaster Manager' has acquired a national resonance, though it has also assumed rather variable political overtones!

As in other countries, so in Italy there has been something of a tug of war between centripetal and centrifugal forces in politics. For a few months in the late 1990s the national government experimented with an independent Agency for Civil Protection, but the Home Office Minister quickly brought it back into the structure of delegated powers, largely because the Fire Service, as the lead agency in disasters, remain an organ of the Ministry of the Interior.

The conflict between central government's desire to satisfy demands for devolution and its reluctance to cede powers has produced some grey areas of emergency preparedness, particularly at the provincial level, where responsibilities are not fully defined. Interestingly, where provinces and regions have statutes that guarantee extra autonomy, civil protection has forged ahead, including in some places, such as Sicily and Sardinia, which were traditionally considered slow to innovate.

All things considered, Italy has succeeded in producing a clear, consistent system of civil protection with which, despite the usual lamentations, most participants are broadly satisfied.
Posted by Professor David E. Alexander at 15:20