Refugees as a "Threat": The Role of Misleading Information 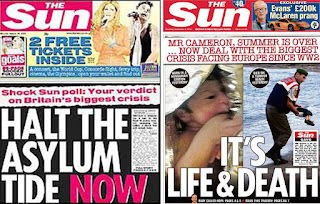 Rational debate on the refugee question is being stifled by misleading information and wrong assumptions. Here are some common viewpoints and refutations. It is worth bearing in mind that the previous UK Government suppressed a report on the evidence base behind migration, describing the evidence as "one-sided". Some of the attempts to mislead are inadvertent, but it is clear that some are deliberate. Almost all the British mass media, including the BBC, are guilty of providing a conflicting picture of the refugee situation, in which unreconcilable information is offered. The tabloid newspapers are, as usual, the worst.

"We are being swamped by migrants."
Most migrants are refugees, hence the term ' migrants' is misleading. There will be opportunists among them, as there among the victims of 'natural' disaster, but the proportion will probably be small.

"This wave of immigrants is unprecedented."
Or so say the Jutes, Saxons, Vikings, Normans, Mediterranean Celts, Huguenots, Picts and Romans (and the vast numbers of Brits who settled abroad).

The Calais entrance to the UK is "under seige".
Fewer than 1% of migrants to Europe arrive there. France offers better benefits to refugees than does Britain, so they would be advised to stay where they are.

"Send them all back."
It is cheaper to integrate refugees than repatriate them.

"They are welfare tourists."
Refugees use health services less than indigenous populations do.

"We are not really involved."
European countries have a legal obligation to resettle refugees without discrimination. It comes from the UN Convention and Protocol, not the EU.

"They are a burden on our economy."
The aging population of Europe needs to be rejuvenated by in-migration, or tax revenues will decline and economies will suffer the 'Japan syndrome' (Japan has almost no in-migration and as a result it will lose 11% of its GDP by 2030 and find it very difficult to support its healthcare system). Refugees are seldom lazy.

"There will be rivers of blood." (Enoch Powell)
Despite the Conservative politician's firebrand words, integration of Ugandan Asian refugees in Leicester was highly successful and rejuvenated the local economy.

"They are taking over our country."
Many refugees would rather go home if it were safe to do so.

"We will build fences and walls to keep them out."
Futile: even the Great Wall of China was a failure.

"We are being dictated to by the European Union."
Member states decide EU policy - by common compromise.

Lastly:-
"We are on top of the situation."
There is a dreadful, hand-to-mouth lack of foresight and planning.
Posted by Professor David E. Alexander at 09:28