Disasters in the New Baroque Age 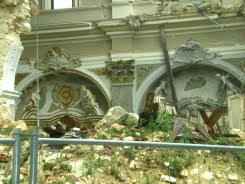 "Tell me, my man, what is the quickest way to Dublin?" "Well, to begin with, Sorr, I wouldn't start from here!"

As I write this, it is exactly 30 years to the hour since I was made homeless by the earthquake of 23 November 1980 in southern Italy. It prompts me to reflect on the role of history in our understanding of disasters.
In an old Hollywood costume drama film, a serf rushes into the king's chamber shouting "Your Majesty! Your Majesty! The Hundred Years' War has started!" That sense of crushing inevitability mixed with historical fallacy often pervades the study of disasters. In this ahistorical age we need to look back as well as forward. History does not repeat itself, but those people who ignore its lessons condemn themselves to relive at least some of its outcomes.
I argue that we live in the new Baroque age (Alexander 2000). The old Baroque age stretched, if you adopt a liberal definition, approximately from 1630 to 1750. It was a time of immense upheaval and change, a time of portentous disaster and of environmental transformation (Maravall 1979). It was characterised by a serious imbalance of wealth. At the same time it was a period of awakening, enlightenment and intense reactions to the social and intellectual strictures of organised religion. There was, nonetheless, conflict among the prevailing schools of thought about how to interpret the world. The intellectual ferment was fed by a tension of opposites, of which wealth versus crushing poverty was the greatest. This was stimulated by the sense of paradox brought by discovery and re-evaluation, on which the whole movement thrived. Symbolism had a paramount role in these processes. Yet the Baroque was not merely an artistic movement: it had distinctive economic, political and strategic characteristics, and distinctive disasters--floods, earthquakes, tsunamis, plagues and famines. It was a period in which economic assets were gambled with, a fact that might remind us of the banking crisis of 2009, just as the other characteristics of the period should remind us of many aspects of life in the early 21st century.
As the industrial revolution prepared the ground for the late 20th century technological revolution, so the conquest of the New World paved the way, by supplying the wealth, for the paradoxes and excesses of the Baroque period.
The Baroque period ended in war and strife. It degenerated into subjugation and dictatorship, so soon to be manifest in bloody and destructive battles. Intellectually, it led to the resurgence of bigotry and pessimism. The parallels between the Baroque period and the present day are striking (Alexander 2002). From 1630 to 1750 was a period in which human populations struggled to come to terms with new technological and socio-economic realities, much like the present time.
Readers will have to forgive my Eurocentric interpretation, but it is justified by historians (e.g. Jones 2003).
We need to learn how to look back. The wrong way is to look back to the last disaster, instead of anticipating the next one, and that is sadly very common. The right way is to study history, including the history of attitudes and responses to disaster, in order to learn its lessons. This requires sophisticated interpretation. Unfortunately, we live in a world that instantly forgets its lessons: witness the huge loss in personal resilience in Western countries since 1945. The fate of the British expeditionary force in Afghanistan in 1840, and of the Soviet Army more recently, ought to have imparted a lesson regarding military involvement in that country in the 2000s.
The way to put the past behind us is not to ignore it, for sooner or later it will come back to haunt us. The preeminence of symbolism in the baroque period has extensive parallels in this modern age of symbolic mass communication. The return of bigotry and social restriction (now called fundamentalism), intensified by demographic pressures, has parallels in both periods.
The Baroque period ended badly. Its demise was marked by the cataclysm of the Lisbon earthquake, fire and tsunami of 1755. Its consequences were strife and bloodshed. The response was extremely pessimistic. There is still time to learn from such events and avoid the worst outcomes for the modern world. Pessimism is not yet necessary.