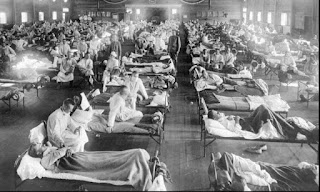 Once upon a time in Tuscany, when my son was very young, I lamented to a friend that all he seemed to have learned at school was how to swear and blaspheme. My friend put on a wise expression and said, very sagely, "David, you must remember that swearing and blaspheming are an ancient tradition in our countryside here." I mention this because, in AD 1244, a group of men in a bothy decided that they were swearing and blaspheming too much and each time they did it they would put a groat in a jar. At the end of the year they would open up the container and spend the proceeds on a feast. As it happened, when they came to open the jar there was so much money in it that they hadn't got the nerve to spend it on food and drink for themselves. So they founded a rescue and care society. Thus was born the Venerable Company of the Misericordia. After 776 years it is still headquartered in the same building, situated next to the cathedral in central Florence. In the small Tuscan town in which I live, the Misericordia did not arrive for a further 291 years (in 1535, precisely), but what are a few centuries between friends?

An organisation of this kind obviously has very deep roots. And there is great pride in it. Moreover, it started a process of creating associations that proliferated to the point that volunteer organisations are the backbone of the Italian civil protection system and there are 3,600 of them. They connect the world of emergencies with the general population. In the last four earthquakes in thed affected areas there were more rescuers than population, which is a remarkable achievement, especially as they are trained, organised and equipped. Most importantly, they are a full part of the system.

In times of grave crisis, we need solidarity, but where are we going to get it? The Covid-19 pandemic ought to teach us the importance of both preparedness and social participation. With regard to preparedness, emergency response consists of planned activities, standardised procedures and improvisation. Too much of the last of these is tantamount to negligence, because it shows up the lack of planning and preparedness. Social participation is about the democratisation of emergency response. Civil protection is us–all of us. It works best where people are protagonists and assume some responsibility for their own destinies. Participatory civil protection is prudent. It draws in the beneficiaries of the system as actors and protagonists, but it, too, needs to be organised in advance, with foresight.

Different countries have different attitudes to emergency preparedness and the protection of the general public. These stem from their administrative and legal systems and cultures, and from the attitude of the holders of power to direct democracy. Cyclone Nargis devastated Myanmar and killed 136,000 of its citizens, in part because they had no role in creating resilience against such an event.

In Britain, there is a culture of "leave it to the experts", or perhaps, given the anti-intellectual wind blowing through the country, disdain for experts (a paradox, indeed). Since the stand-on-your-own-two-feet privations of the Second World War, there has been a gradual and sustained retreat from personal respomsability in favour of leaving the work to officialdom–and blaming officialdom when there are shortcomings in its response. There has also been the ideological assault of Thatcherism, a retreat from social provision and a gradual abandonment of the idea of participatory democracy. "There is no such thing as society," she said, and did her best to make it a self-fufilling prophecy. At the same time, control of the country's assets became ever more centralised.

Britain does not lack a social conscience, or sensitivity to social issues. Many people labour ceaselessly to provide what the state has increasingly turned away from. When there is a major crisis, the response is generally to revive what sociologists call the 'therapeutic community'. But it has been weakened. Britain follows, not the continental European model of solidarity, but the American model of individualism, and this is particularly true in civil protection. It is a pity, as the United States have lost the lead in this field–if they ever had it. The coup de grâce was the response to Hurricane Katrina in August 2005. It was a model of inefficiency and failure.

Commentators and officials used to say that "Britain does not have disasters". We have instead, "major incidents". Why we should be so reticent about calling them disasters is a mystery to me, for that is what they are. Covid-19 is rather more than a "major incident". It is a gargantuan civil contingency that will leave its mark for decades to come–among those who survive it.

There was a period in the decade of the 2000s and early 2010s in which pandemics were the focus of emergency planners' attention. They were then supplanted by a renewed emphasis on counter-terrorism and that in turn was overlain by frantic preparations for the supply-chain disaster of Brexit (emergency response is very much a "flavour of the month" business, just like ice-cream shops). Looking at the current British response to Covid-19, it is difficult to see quite where all that effort on pandemic emergency planning went. Perhaps the answer is that it is too difficult to plan a system that has been decimated, after eight years of Draconian budget cuts. However, it is not exactly easy to organise an alternative system in the thick of the emergency. Voluntarism comes in three types: spontaneous, organised and organised-and-incorporated. The last of these makes a real civil protection system. The first is inefficient because it is shorn of training and equipment, it is not adequately absorbed into the emergency response machine, and it has to be organised with much effort on the spur of the moment. That is what we are currently seeing in Britain. But at least we are seeing an attempt to generate solidarity, even if it is not of the optimum kind.

Emergency planning is something that needs to be done in times of quiescence and peace, but it also goes on throughout the emergency, as the provisions that were made in advance have to be adapted to the dynamic, evolving situation. Much use is made of scenarios. A scenario is not a prediction of the future. In this context, it is a systematic exploration of a range of possible future outcomes. For pandemics, we use parametric models. These are simply sets of equations in which, on the basis of–often flimsy–assumptions and a minimal amount of data–coefficients are set and calculations are made. Garbage in-garbage out if the sum total of the data and the assumptions are not adequate. And the trouble with pandemics is that there is truly massive uncertainty: disease transmission rates, infectiousness, survival rates, social behaviour, the effect of emergency measures, healthcare response–they are all infinitely mutable.

Under such circumstances, two elements of strategy are to be recommended, neither of which has been properly practised in Britain. One is not to discuss the worst case scenario unless there is a very strong practical reason for doing so. The other is to devote very substantial resources to early preparedness, as a precautionary measure and a demonstration of prudence. "Normalcy bias" makes us assume that it won't be that bad. It might be, so we must be ready to fight it.

Besides Covid-19, the shadow of another phantom stalks us. That is the Hollywood model of emergencies. Research (including my research) shows that it is remarkably resilient, not only among the general public, but also among the emergency response communty and the political classes. In essence, the Hollywood model is one in which a destabilising emergency causes the breakdown of society, revealing the essentially selfish, self-seeking egotism of its members. The antidote is marshall law. There have been rumours about preparations for this in Britain, a country which tends to look upon emergencies as public order problems. If we ever arrive at such a situation it will be a sad, sad indictment of British society. It would presuppose that, by and large, people have no social conscience and that the fabric of society is completely threadbare. As that seems unlikely, I think the model should be dropped like a hot potato. It is as well to remember that outbreaks of looting tend to occur strictly where there are substantial preconditions for them. They do not happen spontaneously in a completely unpredictable manner. Nor do other forms of antisocial behaviour. In this, we reap what we sow.

Disasters need to be seen in the contexts in which they occur--I nearly said the context in which we generate them, for they are not natural. Identity politics, scapegoating, contraction in the welfare safety net and public services, all these impinge, negatively, on the developing disaster scenario. For many people, Covid-19 is a bolt from the blue. It either is or will become a major source of anxiety and destabilisation in their lives. Yet what is happening is predictable and was predicted, comprehensively and repeatedly. The question is who was listening? And who was willing to act? There is now a major opportunity to rethink the tenets of modern life and refound them on the basis of prudence, solidarity and participation. And let us not forget that for the inhabitants of Syria, Yemen and all those places where grinding poverty routinely overwhelms people, existential threats have been the normal way of life. The influenza pandemic of 1918-1920 killed most of its victims in developing countries that entirely lacked health-care systems. That is a sobering lesson. Amartya Sen wrote that health care is a prerequisite of development: never more than now.
Posted by Professor David E. Alexander at 21:08