Disasters: Knowledge and Information in the New Age of Anomie 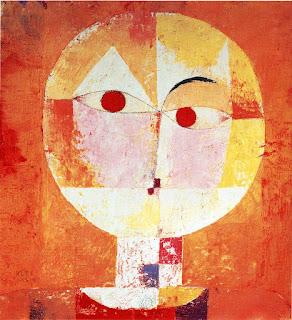 Bertrand Russell once observed, "Most people would die sooner than think--in fact they do so." Perhaps this goes some way to explaining the common failure of risk estimation and the tendency willingly to take unnecessary risks. However, an understanding of risk requires, not only an ability to think things through, but also enough information with which to make informed decisions. It could be argued that people do not seek the relevant information, or when supplied with knowledge and expertise they wilfully ignore it. However, there is another side to this, one which has parallels with looting.

Quarantelli and Dynes (1970) developed a three-stage model whereby property norms are progressively abandoned as a neighbourhood descends into an outbreak of uncontrolled looting. What was previously forbidden by custom, practice, sanction and retribution becomes possible, even desirable, as the emerging group of looters frees itself from the shackles of normal constraint. Something similar has happened with the Internet and social media. The former has been in widespread use since about 1993, and the latter since around 2009. In a quarter of a century and a decade, respectively, attitudes and customs have changed profoundly. Early views of social media (e.g. Bird et al. 2012) found that the negative aspects, such as the diffusion of unfounded rumour, were self-correcting. Early views of the Internet and disasters (e.g. Gruntfest and Weber 1998) were optimistic and identified its positive attributes. However, by the Haiti earthquake of 2010, a different picture had become to emerge and establish itself (Alexander 2010).

In the last decade there has been a massive and utterly profound change in the way that modern, technological channels of information dissemination are used. Although not characterised by loss of control, there has been a change in the way that media, and the information they purvey, are controlled. The change is achieved through apomediation (bypassing information gatekeepers), and control now rests in the information itself, and how it is served up to its consumers (Alexander 2014).

By analogy with the abandonment of property norms, there has been a trend towards forsaking basic ethics and loss of adhesion to the truth. The result is a communication process which has been termed chronic contagion (Pomerantsev 2019). Pronouncements are made on the basis of whim, prejudice and predilection, rather than any solid analysis of evidence or morality. Arbitrary rule is, of course, nothing new, but what is new is the role of networked electronic communication. Vast resources are now devoted to distorting the picture, and all three superpowers are busy utilising them (Druzin and Gordon 2018, Merrin 2019, Rudick and Dannels 2019).

One could argue that this is an inevitable outcome of political ideology and international rivalry, given the new tools that are available forcefully to disseminate views that would not survive any kind of sober, rational analysis. Population growth, migration, proxy wars and environmental change have together generated a current climate of nihilism, sometimes characterised as 'identity politics' and distinguished by a retreat from globalism and a global outlook. In reality, what has evolved is a sort of 'apolitical politics' characterised by the ideology of prejudice, unbridled competition and, often, plain vindictiveness.

To understand this situation, one needs to turn back to the work of the French sociologist David Émile Durkheim (1858-1917). He coined the term anomie, which he defined as a reduction in interaction between social groups leading to a breakdown in mutual understanding, perhaps with a clash of norms, values and ideologies. He attributed it to rapid population growth. Since the late 20th century, the concept of anomie has been reinterpreted (Allan 2005, pp. 128-130). It has also been related to the growth of individualism (Marks 1974, p. 335).

Any attempt to relate the current anomie to disaster risk reduction (DRR) must take account of the 'egg hypothesis'. In this, the factors that directly affect DRR are the yolk, which reposes in the white, which is their political, social, economic and environmental context. Another way of looking at this is that problems caused by disasters cannot be solved in isolation from more general afflictions. For example, if people are poor and their lives are generally precarious, they cannot be made resilient against disasters such as floods and earthquakes unless the problem of vulnerability to life's exigencies in general is reduced. That is where anomie comes in, with a modern interpretation based upon the nihilism and anarchy that has crept into global electronic networked communication. The result, negative as it is, can be seen in Figure 1. Obviously, there are many exceptions to this picture. Its antidotes are thought, reasoning, action, activism, and the application of ethics and morality. People must not allow themselves to be absent from the debate, and they must be willing to learn and reason. Misinformation is successful because of the ability to generate it both forcefully and copiously, but also because of passive acceptance. 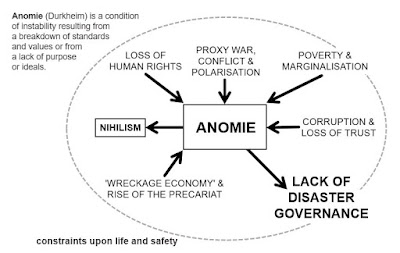 There is also a factor associated with official mindsets. In modern disaster risk reduction, problem solvers abound. They vary from individual researchers to major pan-national organisations. One thing they have in common is a tendency to look for the solutions to disaster problems by concentrating on the problem, not its context. This is understandable because in many cases the context is highly complex, subtle and sophisticated. It may pose issues that could well be regarded as intractable. However, the solution often lies in the context, not the problem. For example, great progress has been made in seismology and seismic engineering. However, two analyses (Escaleras et al. 2007, Ambraseys and Bilham 2011) suggest that the principal cause of earthquake disasters is corruption, which weakens or prevents defensive anti-seismic measures. The question then becomes "What is the process whereby a morally neutral threat such as an earthquake is turned into one with strong moral connotations by the spread of corruption?"

The tendency in research and policy advice is to assume that everyone in power has a strong desire to reduce hazards and threats. In contrast, we are all too often confronted with a situation that varies along a spectrum which extends from utter indifference to a desire to orchestrate conditions for private gain or personal aggrandisement. To shy away from such situations, especially in times of mass manipulation of the global means of communication, is to miss out on understanding why disasters prove to be such intractable problems. Further study of this essential problem requires that we develop a thorough understanding of how real issues, real developments and real knowledge are affected by anomie and its vital relationship with chronic contagion.

Bird, D., M. Ling and K. Haynes 2012. Flooding Facebook: the use of social media during the Queensland and Victorian floods. Australian Journal of Emergency Management 27(1): 27-33.

Gruntfest, E. and Weber, M. 1998. Internet and emergency management: prospects for the future. International Journal of Mass Emergencies and Disasters 16(1): 55-72.

Pomerantsev, P. 2019. This is Not Propaganda: Adventures in the War Against Reality. Faber & Faber, London 256 pp.