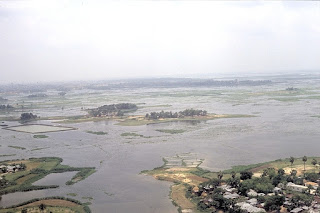 Once again, disasters are topical. As usual, why they are topical rather depends on what else is featuring in the news at the same time. Floods in the southern USA and South Asia throw into sharp relief the possibility that climate change may already be causing extreme events to be larger and more destructive. Perhaps in the images of destruction and inundation we have a graphic illustration of an outcome that needs to be shown to people for them to believe it. Experts prognosticating in front of television cameras are not enough to convince the sceptics about climate change (let alone the hard-line deniers): what is needed is a good, solid floodwave.

But let me introduce a new element: cascading disasters. In essence, a primary impact such as rising floodwaters leads to a series of knock-on effects. But it does not stop there. The interaction of different sources of vulnerability means that effects can be transformed into new causes.

In 2002 flooding on the Moldava or Vltava River severely inundated the city of Prague, but also impacted the Spolana chemical factory, causing an explosion and a toxic cloud. As I write, something similar is expected at the Arkema factory in Crosby, Texas, as a consequence of flooding caused by Tropical Storm Harvey. Primary and back-up systems for cooling volatile chemicals have failed. Explosive or combustive reactions are expected. What will be their consequences? Time will tell.

On the other side of the world in the Indian sub-continent, commuters are being prevented from getting to work and children are being deprived of schooling by flooding that is greater in magnitude and impact than its American counterpart. A building has collapsed in Mumbai, killing and trapping its occupants, leading to a relief effort that must be added to that mounted against the effects of the floods and intense rainfall.

It may be that all future disasters above a certain size will be cascading events to a greater or lesser extent. This is because both the degree of mutual dependency and the growing complexity of society make such an outcome inevitable.

So what can we do about cascading disasters? First, we must recognise that the game has changed. The idea of disaster as simple cause-and-effect must be abandoned. Planning based on this assumption is likely to lead to the wrong remedies, or at least to inefficiency, with respect to both disaster risk reduction and disaster response.

Secondly, in developing strategies, tactics, plans and procedures, we must place the emphasis squarely on understanding vulnerability in all its forms. Commonly it is broken down into categories: physical, environmental, social, psychological, institutional, and so on. However, it also includes elements such as the risks of dependency upon technology, corruption, failure to innovate, and social polarisation. This means that vulnerability is best viewed as a complex, multi-faceted phenomenon. We must understand its mechanisms and the interactions between the facets. As has been written many times, disaster is socially constructed. It is the result of decisions made by individuals or groups, for they are those who put people and their possessions in harm's way. The study of cascading disasters involves the search for escalation points, at which vulnerability becomes compound and creates new "disasters within disasters". Remember that the Japanese M9 earthquake of 11 March 2011 was not the real cause of the Tōhoku disaster: that was the resulting tsunami and its effect on the Fukushima Dai'ichi nuclear plant. This is now one of the largest examples of a cascading disaster.

Thirdly, we must investigate the 'disaster pathways', which are the directions in which impacts propagate, including the 'escalation points'. This will give us the basis for anticipating the effects of a primary agent of disaster and either reducing them a priori or intervening to limit the damage.

In the twentieth century the concept of 'disaster' was viewed very much as one based on static relationships. From 1950, empirical studies of equilibrium were fashionable, and if a system failed to achieve it, then 'homeostasis' could be invoked, or in other words the system was assumed to have a tendency to return from perturbations to its equilibrium, and thus to have a 'central tendency'.

The agenda has changed, and so should the outlook upon disasters. Physically, we have climate change; socially we have population growth and socio-economic polarisation of wealth and opportunity. We also have rapid changes in the global outlook coupled with increasing international interdependency. Seldom has vulnerability looked less stable.

The current floods in the USA and South Asia reveal the gaps and weaknesses in planning, with respect to both risk reduction and disaster response. Rather than cutting budgets and turning away from disaster risk reduction, decision makers need to devote far more resources to the problem--and, of course, to take cascading into account. This will require a shift from a 'technofix' approach that stems from hazard reduction to one based on vulnerability reduction. Many of us in the disaster studies community have been saying this for at least three and a half decades, vox clamantis in deserto. It is now, more than ever, economically and politically advantageous to listen to us.